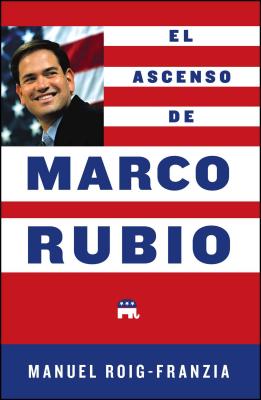 Now in a Spanish-language edition: the definitive biography of Senator Marco Rubio, the youngest Speaker of the Florida Statehouse and the biggest rising star in the Republican Party.

SENATOR MARCO RUBIO has been called the Michael Jordan of Republican politics and a crown prince of the Tea Party. He is a political figure who inspires fierce passions among his supporters—and his detractors.

From his family’s immigrant roots to his ascent from small-town commissioner to the heights of the United States Senate, The Rise of Marco Rubio traces a classic American odyssey. Rubio’s grandfather was born in a humble thatched-palm dwelling in a sugar cane–growing region of Cuba, more than fifty years before Rubio’s parents left the island for a better life in Miami. His father worked as a bartender, his mother as a maid and stock clerk at Kmart. Rubio was quick on his high school football field, and even quicker in becoming a major voice on everything from immigration to the role of faith in public life and one of the great hopes of the Republican Party.

Drawing on hundreds of interviews and documents, Washington Post reporter Manuel Roig-Franzia shows how Rubio cultivated a knack for apprenticing himself to the right mentor, learning the issues, and volunteering for tough political jobs that made him shine. He also has a way with words and the instinct to seize opportunities that others don’t see. As Mike Huckabee says, Rubio “is our Barack Obama with substance.” The Rise of Marco Rubio elegantly tells us why.

A slender, delicate right shoulder knifed downward; a cane flipped sideways. Nancy Reagan was crashing. But before the crowd’s applause gave way to gasps, Marco Rubio, his hair parted just so, a valedictorian’s smile on his face, tugged the aging icon toward him. He caught the ninety-year-old almost parallel to the floor and bound for a bone-chipping thud.

Extraordinary political careers can build momentum from an accretion of perfect moments, and this was just one more for Marco Rubio. Rubio’s reflexes had only sharpened the impression that a party looking for heroes had found a figure with great promise. American politics had never seen anything like him.

A FAMILY THAT FACED THE CHALLENGES OF IMMIGRATION

In the summer of 1962 Rubio’s Cuban grandfather Pedro Víctor asked his bosses for a vacation, and this time they granted it. And so it was that on August 31, 1962, he took an incredibly risky step. He boarded Pan American Airlines Flight 2422 bound for Miami. His troubles began not long after the plane landed.

A LEGISLATOR FULL OF AMBITION

In Marco Rubio’s second year at the Florida capital, a committee was formed to redraw voting district lines. As usual, Rubio’s timing was good and his instincts were spot-on. Redistricting was a once-in-a-decade ritual, and it presented him with a once-in-a-decade opportunity. Not yet thirty, he volunteered to help. In doing so he took the same route he had traveled before, making himself an apprentice in a good position to impress the older generation. Volunteering for the task meant substantial face time with the leaders of the state house. And the leaders noticed him.

Manuel Roig-Franzia was born in Spain and is a writer for The Washington Post Style section. His long-form articles span a broad range of subjects, including politics, power, and the culture of Washington, as well as profiling major political figures and authors. He’s covered US and international presidential campaigns, the January 2010 Haiti earthquake, and more than a dozen major hurricanes, including Katrina. Visit him at ManuelRoigFranzia.com.

“A penetrating look at a rising political star.” —Booklist