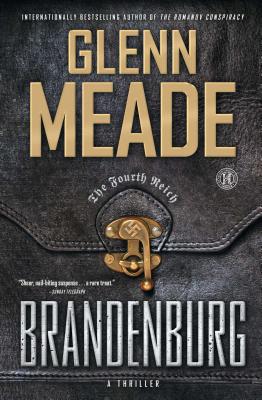 Glenn Meade, the acclaimed, bestselling author of The Second Messiah, delivers unrivaled suspense, unforgettable characters, and a brilliantly absorbing story as a British agent and a German woman find themselves unraveling a plot to bring about the Fourth Reich.

Seventy years ago, the greatest crime against humanity was committed.

Today it’s only a heartbeat away from happening again.

In Paraguay, an elderly businessman kills himself. In Berlin, a neo-Nazi is gunned down in the street.

Trying to connect the murders, intelligence agent Joe Volkmann, aided by a beautiful young German journalist, travels to Paraguay and discovers a clue—the charred remains of an old black-and-white photograph in a remote jungle house. A photograph that holds the first key to an extraordinary secret—and a plot to create the Fourth Reich.

Volkmann soon uncovers that a string of bizarre killings around the world are all linked by a single purpose. And he also discovers that the journalist he trusted, Erica Kranz, is somehow linked to the plan.

Haunted by the ghosts of the past, and desperate to unearth an extraordinary secret, Volkmann and Kranz are plunged into a dangerous world of terrorism, fanaticism, and deception as they stare true evil in the face.

Praise For Brandenburg: A Thriller…

“Meade's second foray into international intrigue imagines that Nazis biding time in South America hatch a viable plot to take over contemporary Germany. The novel opens with a splendidly tantalizing episode of eavesdropping by a Paraguayan reporter who, before he's caught and killed, hides a tell-tale tape recording. . . . Fast, sly, and slick, this thriller delivers the goods—tension, action, plot twists—until the smoke clears on the last page.”
— Booklist