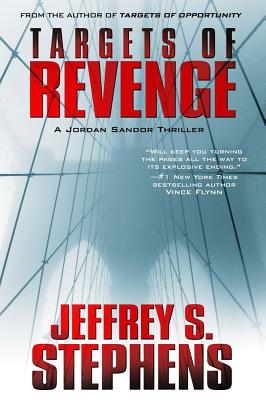 The exciting sequel to Targets of Opportunity features the return of a revenge-seeking Jordan Sandor who puts his life at risk to take down a ruthless mastermind and terrorist.

All the bureaucratic scolding in Washington cannot stop resourceful CIA Agent Jordan Sandor when he’s hungry for revenge. This time he’s on the hunt for the cold-blooded sociopath known as Adina, whose indiscriminate slaughter of innocent people, including Sandor’s close friend, represents man at his worst.

Mobilizing a team of skilled and dedicated agents to carry out his secret operation, Sandor flies in the face of his superiors’ stern warnings—ultimately crash-landing in the heart of the Venezuelan jungle. Armed with little more than a combat knife and a deadly automatic weapon, he infiltrates Adina’s camp and discovers that the ruthless terrorist is smuggling not only cocaine into the United States, but also a deadly substance that could cost tens of thousands of lives.

Sandor develops intel that leads him to Egypt and then Moscow as he fights to prevent this disaster, but after he lands on Interpol’s list of international fugitives, the truth becomes clear: Adina’s evil web extends to the far corners of the globe. Meanwhile, someone Sandor trusts could very well be feeding the agent dangerous lies as he struggles to stay on Adina’s trail.

More focused than ever, Sandor refuses to end his perilous mission, even after he has been taken captive. In the end, when he uncovers the realities of Adina’s deranged plan for a catastrophic assault on New York City, Sandor has no choice but to risk his life to protect his country’s safety and freedom.

Jeffrey S. Stephens is a native New Yorker who now lives in Greenwich, Connecticut with his wife Nancy, where they raised their two sons, Graham and Trevor. Stephens is the author of the Jordan Sandor thrillers Targets of Deception and Targets of Opportunity.

"Targets of Revenge is like a big summer action movie. There are last-second escapes, plot twists, and double crosses that keep the plot moving quickly...[Sandor] is the CIA version of DIrty Harry...Stephens does his homework, taking the time to get nice local details for the wide-ranging locations and to develop interesting secondary characters. Anyone who has enjoyed the first two will want to read Sandor’s latest adventure."
— Scott Pearson, author of Star Trek: Honor in the Night

"Jeffrey Stephens' deftly rendered new novel plunges the reader into a deadly maelstrom of secrets, lies and shadows. . . .Targets of Revenge leaves your heart pounding, again reminding us in terrifying detail that there are many who will go to any length to attack the United States."
— BWWBooksWorld.com

“Smoothly written…Stephens gives us a hero [Jordan Sandor] who is easy to root for, a fellow who doesn’t fret about morality or worry about much of anything beyond killing the bad guys.”
— Publishers Weekly

“The novel reads like the early work of Robert Ludlum, especially during the intense action sequences…those who enjoy plots revolving around covert CIA action will stick with this one to the end.”
— Booklist

“An attorney, Stephens lays out his story in orderly fashion, with one action scene neatly following another. The pace of [Targets of Revenge] is Bourne-like…The tale maintains our interest…[Targets of Revenge is] skillfully rendered…”
— Kirkus Reviews
or
Not Currently Available for Direct Purchase
Copyright © 2020 American Booksellers Association