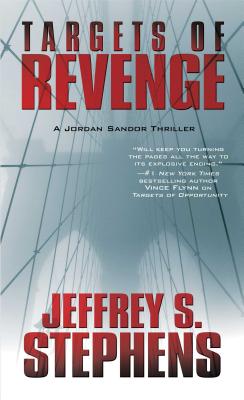 CIA agent Jordan Sandor returns with a vengeance—putting his life at risk deep within in the Venezuelan jungle to take down a ruthless mastermind and terrorist in a thriller that “will keep you turning the pages all the way to its explosive ending” (Vince Flynn).

Despite stern warnings from his superiors, Sandor mobilizes a team of skilled, dedicated agents to secretly penetrate the Venezuelan jungle. Armed with little more than a combat knife and a deadly automatic weapon, Sandor infiltrates Adina’s camp and discovers that the ruthless terrorist is smuggling not only cocaine into the United States but also a deadly substance that could cost tens of thousands of lives.

Sandor’s intel leads him to Egypt and Moscow, but when he lands on Interpol’s list of international fugitives, the truth becomes clear: Adina’s evil web is far-reaching. Sandor refuses to end his perilous mission, however, even after being taken captive. When he uncovers Adina’s plan for a catastrophic assault on New York City, he knows he has no choice: he must risk his life to protect his country’s safety and freedom.

Jeffrey S. Stephens is a native New Yorker who now lives in Greenwich, Connecticut with his wife Nancy, where they raised their two sons, Graham and Trevor. Stephens is the author of the Jordan Sandor thrillers Targets of Deception and Targets of Opportunity.
or
Not Currently Available for Direct Purchase
Copyright © 2020 American Booksellers Association