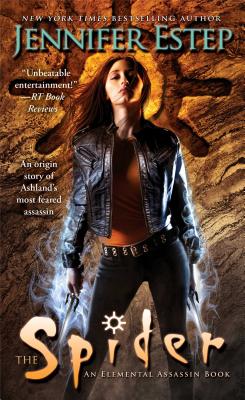 For the first time, the full origin story of Gin Blanco's transformation into the fearsome assassin known as the Spider—book ten in the red-hot Elemental Assassin urban fantasy series.

How did I end up in a career where I always have blood on my hands? Well, let me tell you a story about an assassin who thought she could do no wrong. . . .

Ten years ago. A blistering hot August night. I remember like it was yesterday. The night I, Gin Blanco, truly became the Spider. Killing people is what I do best, especially now that I’ve honed my Ice and Stone magic. But back then, I had yet to learn one very important rule: arrogance will get you, every single time.

This particular job seemed simple: murder a crooked building contractor with ties to ruthless Fire elemental Mab Monroe. My mentor, Fletcher Lane, had some misgivings, but I was certain that I had the situation under control . . . right up until I exposed my weaknesses to a merciless opponent who exploited every single one of them. There’s a reason assassins aren’t supposed to feel anything. Luckily, a knife to the heart can fix that problem, especially when I’m the one wielding it. . . .

Praise For The Spider (Elemental Assassin #10)…

“Estep has truly hit the jackpot with this outstanding series!” —Romantic Times

“This series kicked off with a bang, and the action hasn’t let up since.” —Fresh Fiction

"A raw, gritty, and compelling walk on the wild side, one that had me hooked from the first page." -- Nalini Singh, New York Times bestselling author

Jennifer Estep is a New York Times and USA Today bestselling author prowling the streets of her imagination in search of her next fantasy idea. Spider’s Bite, Web of Lies, Venom, Tangled Threads, Spider’s Revenge, By a Thread, Widow’s Web, Deadly Sting, Heart of Venom, The Spider, Poison Promise, Black Widow, Spider’s Trap, Bitter Bite, Unraveled, and Snared, along with the e-shorts Thread of Death, Parlor Tricks, Kiss of Venom, Unwanted, and Nice Guys Bite are the other works in her red-hot Elemental Assassin urban fantasy series. Jennifer is also the author of the Black Blade and Mythos Academy young adult urban fantasy series and the Bigtime paranormal romance series. For more on Jennifer and her books, visit her at JenniferEstep.com and @Jennifer_Estep.
Loading...
or support indie stores by buying on