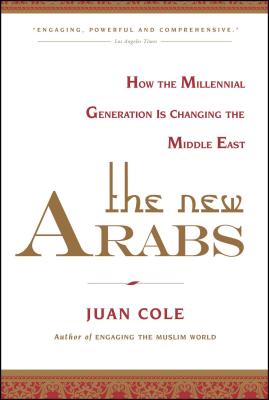 How the Millennial Generation is Changing the Middle East

Renowned blogger and Middle East expert Juan Cole takes us “inside the youth movements in Tunisia, Egypt, and Libya, showing us how activists used technology and social media to amplify their message and connect with like-minded citizens” (The New York Times) in this “rousing study of the Arab Spring” (Publishers Weekly, starred review).

For three decades, Cole has sought to put the relationship of the West and the Muslim world in historical context. In The New Arabs he has written “an elegant, carefully delineated synthesis of the complicated, intertwined facets of the Arab uprisings,” (Kirkus Reviews), illuminating the role of today’s Arab youth—who they are, what they want, and how they will affect world politics.

Not all big groups of teenagers and twenty-somethings necessarily produce historical movements centered on their identity as youth, with a generational set of organizations, symbols, and demands rooted at least partially in the distinctive problems of people their age. The Arab Millennials did. And, in a provocative, big-picture argument about the future of the Arab world, The New Arabs shows just how they did it. “Engaging, powerful, and comprehensive…The book feels as indispensable to scholars as it is insightful for a more casual reader” (Los Angeles Times).

Praise For The New Arabs: How the Millennial Generation is Changing the Middle East…

“Engaging, powerful and comprehensive. …  [Cole] structures chapters with a handsome amount of narrative, peppering them with stories from his own travels and conversations undertaken in fluent Arabic. …The book feels as indispensable to scholars as it is insightful for a more casual reader.”
— Nathan Deuel

“[A] rousing study of the Arab Spring. … Cole’s deep, nuanced exploration of political and social currents underneath the uprisings shines; he shows Westerners who think the Arab world is divided between corrupt despots and Islamist zealots just how strong and pervasive the tendencies towards liberalism and democracy are.”
— Publishers Weekly (starred review)

"Paints a nuanced picture of a fascinating generation. . . . The value of the book becomes apparent in the depth it provides to the simplistic, sound bite-ready explanations for the Arab Spring."
— William O'Connor

“An elegant, carefully delineated synthesis of the complicated, intertwined facets of the Arab uprisings.”
— Kirkus

“Ambitious and largely successful… Cole’s account is rich and textured, and unexpectedly optimistic. Western readers may be surprised by the idealistic liberality and secularism of the young people he profiles. At the same time, Cole doesn’t shy away from the ugliness of his story. … The New Arabs distinguishes itself by presenting a full, rich spectrum of ideas and observations [and] is an indispensable work for the contemporary reader of Middle East history and politics. It grants backstage access to one of the 21st century’s most important social movements and illuminates the motives and methods of the young people who are remaking the region. Our first reaction to dramatic change is usually to oversimplify in order to 'understand.' Cole has the courage to tell a more complicated story, and that makes The New Arabs a vital read.”
— James Norton

“[The New Arabs] is at its most illuminating when it takes the reader inside the youth movements in Tunisia, Egypt and Libya, showing us how activists used technology and social media to amplify their message and connect with like-minded citizens across the region. … Mr. Cole chronicles it in fascinating detail here, recounting the stories of prominent dissidents and their often pioneering use of Facebook, YouTube, Twitter and cellphone technology to network and organize.”
— Michiko Kakutani

"[Cole's] comprehensive narrative of political events will long serve as a vital resource for those wanting to understand this era."
— Lawrence Rosen

"The New Arabs is at its best in its vivid recounting of the strange amalgamation of dissident bloggers, student groups, labor unions and repressed Islamists who succeeded in toppling the oppressive regimes.”
— The Pittsburgh Post-Gazette

Juan Cole is Richard P. Mitchell Collegiate Professor of History at the University of Michigan. He is the author of Engaging the Muslim World and Napoleon’s Egypt. He has been a regular guest on PBS NewsHour and has also appeared on ABC World News, Nightline, the Today show, Charlie Rose, Anderson Cooper 360, The Rachel Maddow Show, The Colbert Report, Democracy Now!, Al Jazeera America, and many others. He has commented extensively on al-Qaeda and the Taliban, Iraq, the politics of Pakistan and Afghanistan, Syria, and Iranian domestic struggles and foreign affairs. He has a regular column on TruthDig.com. Visit JuanCole.com.
Loading...
or support indie stores by buying on