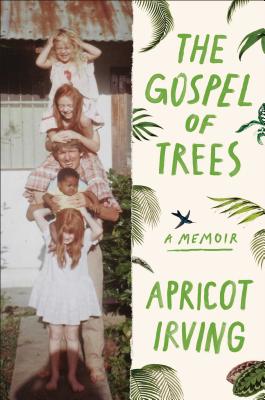 The Gospel of Trees

In this compelling, beautiful memoir, award-winning writer Apricot Irving recounts her childhood as a missionary’s daughter in Haiti during a time of upheaval—both in the country and in her home.

Apricot Irving grew up as a missionary’s daughter in Haiti—a country easy to sensationalize but difficult to understand. Her father was an agronomist, a man who hiked alone into the hills with a macouti of seeds to preach the gospel of trees in a deforested but resilient country. Her mother and sisters, meanwhile, spent most of their days in the confines of the hospital compound they called home. As a child, this felt like paradise to Irving; as a teenager, the same setting felt like a prison. Outside of the walls of the missionary enclave, Haiti was a tumult of bugle-call bus horns and bicycles that jangled over hard-packed dirt, the clamor of chickens and cicadas, the sudden, insistent clatter of rain as it hammered across tin roofs and the swell of voices running ahead of the storm.

As she emerges into womanhood, an already confusing process made all the more complicated by Christianity’s demands, Irving struggles to understand her father’s choices. His unswerving commitment to his mission, and the anger and despair that followed failed enterprises, threatened to splinter his family.

Beautiful, poignant, and explosive, The Gospel of Trees is the story of a family crushed by ideals, and restored to kindness by honesty. Told against the backdrop of Haiti’s long history of intervention—often unwelcome—it grapples with the complicated legacy of those who wish to improve the world. Drawing from family letters, cassette tapes, journals, and interviews, it is an exploration of missionary culpability and idealism, told from within.

"The daughter of a dedicated missionary, Irving grew up in Haiti, where she learned both the power and the risks of working to improve the world--and the toll it can take on a family. An eye-opening memoir."

“The Gospel of Trees is rich with such passionate insights; also, it’s a rare thing to find an insider account of missionary life not blunted by conventional piety. Very particularly sensitive to Haiti, this book is an object lesson for anyone wanting to do good in the world: forget about moving that mountain of sand with your tweezers; you will (as the old Vodou song has it) be carrying water with a spoon.”
— Madison Smartt Bell, award-winning author of All Soul’s Rising

Apricot Anderson Irving is currently based in the woods outside Portland, Oregon, but has lived in Haiti, Indonesia, and the UK. Her missionary parents moved to Haiti when she was six years old; she left at the age of fifteen. She returned to Haiti in the spring of 2010 to cover the earthquake for the radio program This American Life. She is the recipient of a Rona Jaffe Foundation Writers’ Award and an Oregon Literary Arts Fellowship. Her renowned oral history project, BoiseVoices.com, was a collaboration between youth and elders to record the stories of a neighborhood in the midst of gentrification. She loves to garden, and on rare occasions she can be persuaded to belt out Irish folk songs in bars. The Gospel of Trees is her first book.
Loading...
or
Not Currently Available for Direct Purchase