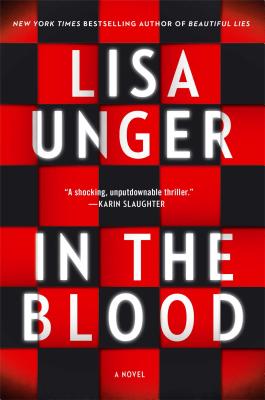 In the Blood is the Lisa Unger novel we've all been waiting for—and a return to the dark psychological suspense that made Beautiful Lies a bestseller around the world.

LANA GRANGER LIVES A LIFE OF LIES. She has told so many lies about where she comes from and who she is that the truth is like a cloudy nightmare she can’t quite recall. About to graduate from college and with her trust fund almost tapped out, she takes a job babysitting a troubled boy named Luke. Expelled from schools all over the country, the manipulative young Luke is accustomed to control­ling the people in his life. But, in Lana, he may have met his match. Or has Lana met hers?

Lisa Unger’s writing has been hailed as “sensa­tional” (Publishers Weekly) and “sophisticated” (New York Daily News), with “gripping narrative and evocative, muscular prose” (Associated Press). Masterfully suspenseful, finely crafted, and written with a no-holds-barred raw power, In the Blood is Unger at her best.

Praise For In the Blood: A Novel…

“[A] brisk, crafty and fascinating psychological thriller . . . Offers plenty of good, scary fun — scenes that will make readers jump . . . [and] a reveal that will surely elicit a satisfied gasp from the reader. . . . In the Blood is a complex mosaic as well, one that’s tricky, arresting and meaningful.”
— The Washington Post

“In The Blood may be [Unger's] best one yet. . . . Keeps the shocks and twists coming at a breakneck pace.”
— Tampa Bay Tribune

“Always scary…Unger neatly distorts our perceptions, so there’s no telling what is what. Well done.”
— New York Daily News

“A riveting chess match of twists will keep you guessing—and keep you up at night.”
— Family Circle

"Nothing is what it seems as Unger pulls off some beautiful surprises in this intriguing thriller. . . . Masterfully told."
— Associated Press

“Unger pulls off a bravura feat. . . . Readers will … savor the pleasure of being guided by Unger’s sure hand along a deliciously twisted narrative path. Another scary winner from an accomplished pro.”
— Kirkus Reviews

"A fantastic novel full of suspense and intrigue. Massively recommended."
— The Sun (UK)

"This fast-moving book is a rollercoaster thrill ride, withholding crucial facts and then pounding you with them as the chapters wind down. It’s a quick, adrenaline-filled read with a slam-bang climax. Unger’s skill with words, combined with a pace that never lets up, is guaranteed to keep the pages turning long past the midnight hour."
— Bookpage

"Unger's latest offering is full of engaging twists and turns. . . . Skillfully keeps the reader guessing. . . Fans of mystery and psychological suspense. . . will be delighted with this imaginative story."
— Library Journal

“Unger is a compelling storyteller whose tales rest on human frailty. . . . She makes it impossible to stop reading.”
— The Charlotte Observer

“In the Blood is an absolute corker of a thriller that cements Lisa Unger's status as one of the brightest stars in the game.”
— Dennis Lehane

"Reading In the Blood is like grabbing a live wire. . . . A shocking, unputdownable thriller."
— Karin Slaughter

"In the Blood is a riveting new thriller from Lisa Unger. Dark and haunting, with a deadly twist that you won't see coming 'til you're hit between the eyes, this book is a winner."
— Linda Fairstein, author of Death Angel

"In the Blood is a psychological thriller that played me--in the best sense--from beginning to surprising end. I guarantee Lisa Unger will pull the rug out from under you more than once, so hold tight."
— Andrew Pyper, author of The Demonologist

“Stellar... Heartbroken should be on everyone’s summer to-read list. For best results, read it alone on an island on a dark and stormy night.”
— USA Today (4 stars)

“Heartbroken has all the makings of a high-wire thriller. But it's the twisted psyches of its main characters that really unsettle.”
— People (3 ½ stars)

“Deeply plotted and complex and carries an undeniable momentum. Lisa Unger’s enthralling cast of characters pulled me right in and locked me down tight. This is one book that will have you racing to the last page, only to have you wishing the ride wasn’t over.”
— Michael Connelly

“Riveting psychological suspense of the first order. If you haven’t yet experienced Lisa Unger, what are you waiting for?”
— Harlan Coben

“I read Black Out in one hungry gulp and spent the rest of the night trying to calm my jangled nerves. This is a stunning, mind-bending shocker with moments of sheer terror — one of the best thrillers I’ve read this year!”
— Tess Gerritsen

“Unger’s latest keeps the adrenaline pumping with a roller-coaster plot and harrowing psychological suspense. … Well worth the ride.”
— People

“Perfect pitch, characters we can recognize as versions of ourselves, a plot in which a vague sense of suspense almost instantly appears and then grows with the speed of a waterslide. … Lip-smacking good.”
— Chicago Tribune