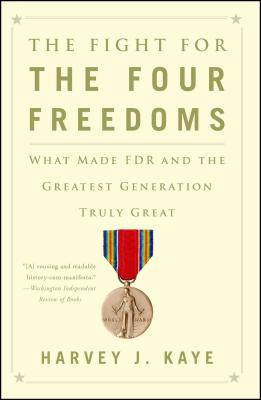 The Fight for the Four Freedoms

What Made FDR and the Greatest Generation Truly Great

The fascinating story of Franklin Roosevelt, the Greatest Generation, and the freedoms they won, is a “stirring, heady dose of American history by a…progressive thinker” (Kirkus Reviews).

On January 6, 1941, the Greatest Generation gave voice to its founding principles, the Four Freedoms: Freedom from want and from fear. Freedom of speech and religion. In the name of the Four Freedoms they fought the Great Depression. In the name of the Four Freedoms they defeated the Axis powers. In the process they made the United States the richest and most powerful country on Earth. And, despite a powerful, reactionary opposition, the men and women of the Greatest Generation made America freer, more equal, and more democratic than ever before.

Harvey Kaye gives passionate voice to the Greatest Generation and argues not only that the root of their “greatness” stemmed from their commitment to equality, change, and progressive politics, but why modern generations should follow their lead. In Kaye’s hands, history becomes a call for action. Now he retells this generation’s full story and reclaims their progressive influence throughout the twentieth century.

Through the words of civil rights protestors, authors, and congressmen, Kaye argues that the most progressive generation in America history not only stopped Nazi Germany, Fascist Italy, and Imperial Japan, but made America and the world freer, more equal, and more democratic—and that modern generations only honor them by following their lead. The Fight for the Four Freedoms “will stir its intended audience, while illustrating what astute politicians and historians recognize: Political struggle is as much a battle over our past as it is over our present and future” (Cleveland Plain Dealer).

Praise For The Fight for the Four Freedoms: What Made FDR and the Greatest Generation Truly Great…

"No one has ever loved a nation more or spanked it harder for straying from its premise than Harvey Kaye. Read The Fight for the Four Freedoms. It contains the historical truths that will set America free."
— Norman Lear, TV Writer-Producer; Founder People for the American Way

"Harvey Kaye is the Indiana Jones of American historians. He claws his way into the past and returns with lost treasures. The Fight for the Four Freedoms is great history, as we've come to expect from Kaye. It tells a story that cannot be forgotten, of a visionary president and the generation he inspired to renew America and save the world. But it is, as well, a roadmap that can get this country off its long detour and back on the path FDR charted toward that freer, more equal and democratic America."
— John Nichols, Washington Correspondent, The Nation

“The Fight for The Four Freedoms reminds us that victory in World War II was measured not just in the defeat of America’s enemies, but also in securing the great progressive legacy of Franklin Roosevelt and the Greatest Generation: freedom from fear and want, freedom of speech and religion. As Kaye forcefully demonstrates, to safeguard, indeed broaden these freedoms is a challenge handed down to each later generation. This is a book by a patriot who invites his readers to share, to remember, to act and to be unafraid.”
— William vanden Heuvel, former U.S. Ambassador to the United Nations; Founder and Chair Emeritus, The Franklin and Eleanor Roosevelt Institute

"Harvey Kaye has done it again. The Fight for the Four Freedoms reaches back into history - to Franklin Roosevelt's vision of a truly just and fair America - for inspiration about how we can re-imagine a progressive future. Just as he did with his important work on Thomas Paine, Kaye shows how the victories and defeats of the 1930s and 1940s - the struggle of our parents and grandparents - contain the bricks and straw for rebuilding democracy. Once again, he tells a spirited story written for you and me."
— Bill Moyers

"A spirited call to remember and act on the original progressive intent of Franklin Roosevelt’s Four Freedoms."
— Kirkus

“If you believe America desperately needs a great surge of democracy in the face of fierce opposition from reactionary and corporate forces, then remembering and reviving the spirit of President Franklin D. Roosevelt, who died 69 years ago this week, is in order.”
— Moyers & Company

“Kaye’s book will stir its intended audience, while illustrating what astute politicians and historians recognize: Political struggle is as much a battle over our past as it is over our present and future.”
— Cleveland Plain Dealer

“[A] marvelous history lesson.”
— The Oklahoman

Harvey J. Kaye is the Ben & Joyce Rosenberg Professor of Democracy and Justice Studies at the University of Wisconsin-Green Bay, an award-winning author of numerous books, including Thomas Paine and the Promise of America, a frequent contributor to the Huffington Post and The Daily Beast, and a repeat guest on radio and television programs such as To the Best of Our Knowledge, the Thom Hartmann Show, and Bill Moyers' Journal.
Loading...
or support indie stores by buying on