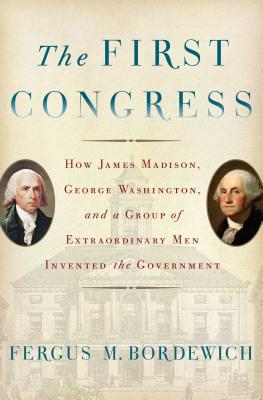 The little known story of perhaps the most productive Congress in US history, the First Federal Congress of 1789–1791.

The First Congress was the most important in US history, says prizewinning author and historian Fergus Bordewich, because it established how our government would actually function. Had it failed—as many at the time feared it would—it’s possible that the United States as we know it would not exist today.

The Constitution was a broad set of principles. It was left to the members of the First Congress and President George Washington to create the machinery that would make the government work. Fortunately, James Madison, John Adams, Alexander Hamilton, and others less well known today, rose to the occasion. During two years of often fierce political struggle, they passed the first ten amendments to the Constitution; they resolved bitter regional rivalries to choose the site of the new national capital; they set in place the procedure for admitting new states to the union; and much more. But the First Congress also confronted some issues that remain to this day: the conflict between states’ rights and the powers of national government; the proper balance between legislative and executive power; the respective roles of the federal and state judiciaries; and funding the central government. Other issues, such as slavery, would fester for decades before being resolved.

The First Congress tells the dramatic story of the two remarkable years when Washington, Madison, and their dedicated colleagues struggled to successfully create our government, an achievement that has lasted to the present day.

“Fergus M. Bordewich has transformed the recent multivolumecollection of sources on the First Federal Congress into a livelynarrative. . . . The First Congress is a perfect example of what a verygood writer can do with these raw materials.”
— Carol Berkin

"The First Congress faced its daunting agenda with resourcefulness. . . . [Bordewich] provides clear and often compelling analyses of the problems that required varying doses of compromise and persuasion, and he paints scenes in New York and Philadelphia with colorful illustrations that are enviable examples of the historian’s art. . . . Readers will enjoy this book for making an intricate story clear and fascinating."
— David S. Heidler

“Bordewich’s worthy contribution to popular history shows us how a combination of high-minded determination, vote-trading and back-room deals created ‘muscular and enduring institutions’ that could adapt and thrive for more than 200 years.”
— Frank Davies

“Entertaining. . . . The colorful machinations of our first Congress receive a delightful account that will keep even educated readers turning the pages.”

“Bordewich expertly conveys the excitement of how the first U.S. Congress(1789–91) created a government. . . . This engaging and accessible book sheds new light on themeaning of constitutionality.”

“Bordewich’s noteworthy exploration of the foundation for a working constitutional government provides an important perspective on American history.”

Fergus M. Bordewich is the author of several books, among them America’s Great Debate: Henry Clay, Stephen A. Douglas, and the Compromise That Preserved the Union, which won the Los Angeles Times Book Prize in history. His articles have appeared in many magazines and newspapers. He lives in San Francisco. Visit him at FergusBordewich.com.
Loading...
or
Not Currently Available for Direct Purchase