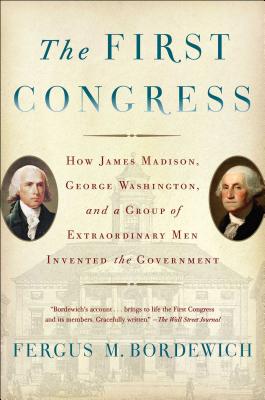 This “fascinating” (Chicago Tribune), “lively” (The New York Times) history tells how the First Congress and the Washington administration created one of the most productive and far-reaching governments in American history—“gracefully written…and well worth reading” (The Wall Street Journal).

The First Congress may have been the most important in American history because it established how our government would work. The Constitution was a broad set of principles that left undefined the machinery of government. Fortunately, far-sighted, brilliant, and determined men such as Washington, Madison, Adams, Hamilton, and Jefferson (and others less well known today) labored to create a functioning government.

In The First Congress, award-winning author Fergus Bordewich brings to life the achievements of the First Congress: it debated and passed the first ten amendments to the Constitution, which we know as the Bill of Rights; admitted North Carolina and Rhode Island to the union when they belatedly ratified the Constitution, then admitted two new states, Kentucky and Vermont, establishing the procedure for admitting new states on equal terms with the original thirteen; chose the site of the national capital, a new city to be built on the Potomac; created a national bank to handle the infant republic’s finances; created the first cabinet positions and the federal court system; and many other achievements. But it avoided the subject of slavery, which was too contentious to resolve.

The First Congress takes us back to the days when the future of our country was by no means assured and makes “an intricate story clear and fascinating” (The Washington Post).

“Fergus M. Bordewich has transformed the recent multivolume collection of sources on the First Federal Congress into a lively narrative. . . . The First Congress is a perfect example of what a very good writer can do with these raw materials.”
— Carol Berkin

"The First Congress faced its daunting agenda with resourcefulness. . . . [Bordewich] provides clear and often compelling analyses of the problems that required varying doses of compromise and persuasion. . . . Readers will enjoy this book for making an intricate story clear and fascinating."
— David S. Heidler

“Entertaining. . . . The colorful machinations of our first Congress receive a delightful account that will keep even educated readers turning the pages.”
— Kirkus Reviews (starred review)

“Bordewich expertly conveys the excitement of how the first U.S. Congress(1789–91) created a government. . . . This engaging and accessible book sheds new light on themeaning of constitutionality.”
— Library Journal

"Bordewich’s telling of the debates around what we think of as the Bill of Rights is especially illuminating. . . . Bordewich brings these debates to life with fascinating and sympathetic portraits."
— Philip A. Wallach, The Brookings Institution

Fergus M. Bordewich is the author of several books, among them America’s Great Debate: Henry Clay, Stephen A. Douglas, and the Compromise That Preserved the Union, which won the Los Angeles Times Book Prize in history. His articles have appeared in many magazines and newspapers. He lives in San Francisco. Visit him at FergusBordewich.com.
Loading...
or support indie stores by buying on