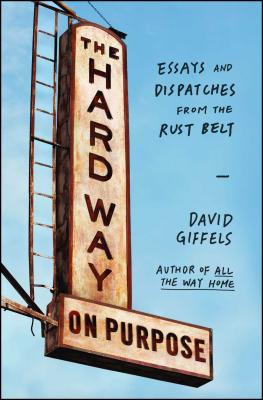 The Hard Way on Purpose

Essays and Dispatches from the Rust Belt

Award-winning author and journalist David Giffels explores the meaning of identity and place, hamburgers, hard work, and basketball in this collection of wry, irreverent essays reflecting on the many aspects of Midwestern culture and life from an insider’s perspective.

In The Hard Way on Purpose, David Giffels takes us on an insider’s journey through the wreckage and resurgence of America’s Rust Belt. A native who never knew the good times, yet never abandoned his hometown of Akron, Giffels plumbs the touchstones and idiosyncrasies of a region where industry has fallen, bowling is a legitimate profession, bizarre weather is the norm, rock ’n’ roll is desperate, thrift store culture thrives, and sports is heartbreak. Intelligent, humorous, and warm, Giffels’s linked essays are about coming of age in the Midwest and about the stubborn, optimistic, and resourceful people who prevail there.

Praise For The Hard Way on Purpose: Essays and Dispatches from the Rust Belt…

“They still build souls in Akron. The Hard Way on Purpose is proof. David Giffels is a Rust Belt prophet, laughing—sometimes through his tears—in Doom’s face. You want to hear America singing? Buy this book.”
— Scott Raab, author of The Whore of Akron: One Man’s Search for the Soul of LeBron James

“David Giffels writes straight into the heart of Akron, Ohio, the place we both call home. It’s a hard place to be from, which is why it makes such a good story. What other place could have spawned Jim Jarmusch, LeBron James, Lux Interior and the Goodyear blimp? So it’s no accident that this book reads like the American soul—wicked and sincere and ingeniously weird. It is a great story, an authentic one about the way people protect the places they love, and The Hard Way on Purpose gets it exactly right.”
— Patrick Carney, The Black Keys (celebrated indie rock band from Akron, Ohio)

“This amazing book will resonate with anyone who’s ever loved a hometown, wherever it might be—especially if it’s the kind of hometown people usually leave. Even if you’ve never been to Akron, Giffels brilliantly captures how it feels to love your city fiercely, even when it’s falling apart. He celebrates Akron as ‘the Paris of hard times.’ Giffels might be its Baudelaire.”
— Rob Sheffield, author of Love Is a Mix Tape and Turn Around Bright Eyes

“Occasionally, an essayist so perfectly chronicles a specific place that he or she becomes synonymous with it. Joseph Mitchell and New York; Joan Didion and California; Adam Gopnik and Paris; John Jeremiah Sullivan and the American South. With The Hard Way on Purpose, David Giffels has pulled a chair up to this lofty literary table, and in so doing, provided the hardscrabble industrial Midwest with its own lyrical, learned, and very large-hearted champion.”
— David Goodwillie, author of American Subversive

“A heartfelt analysis...the portrait painted here is an honest and revealing one, illuminating the cultural factors that have given a strange, shadowy sort of hope to millions of Americans.”
— Publishers Weekly

"This collection of essays about life in Akron, Ohio, is so deep and inviting and surprising that I plan to carry a bunch in my trunk. Then, instead of mounting the Heartland defense, I’ll just throw the bigmouth fucknut in question a copy of Giffels’ masterwork and let it do the talking."
— Eric Nuzum, Washington Independent Review of Books

"[Giffels] gives you the Midwestern experience, from hoping your greatest sports star will choose his hometown over the bright lights, big city (in this case, LeBron James, who famously didn’t keep playing for his hometown) to the search for the perfect bowling shirt."
— Flavorwire

“Giffels’ voice is friendly.…his details so vibrant and fresh. . . . A region on the mend has found its voice.”
— The New York Times Book Review

"Let this heartfelt collection of essays by David Giffels reveal the wit and pride that are beyond all our preconceptions of Akron, Ohio."
— Los Angeles Times

David Giffels is the author of The Hard Way on Purpose: Essays and Dispatches From the Rust Belt, nominated for the PEN/Diamonstein-Spielvogel Award for the Art of the Essay, the memoir All the Way Home, winner of the Ohioana Book Award, and Furnishing Eternity. His writing has appeared in the New York Times Magazine, the Atlantic.com, Parade, the Wall Street Journal, Esquire.com, Grantland.com, Redbook, and many other publications. He also was a writer for the MTV series Beavis and Butt-Head. He is an associate professor of English at the University of Akron, where he teaches creative nonfiction in the Northeast Ohio Master of Fine Arts Program.