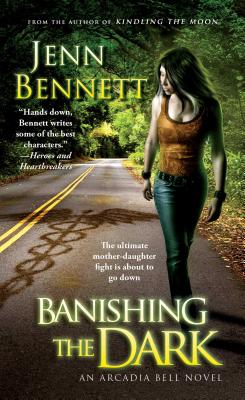 In Book Four of the beloved urban fantasy series Romantic Times calls one “for your keeper shelf,” the ultimate mother-daughter fight is about to go down.

Complicated does not begin to describe Arcadia Bell’s life right now: unnatural magical power, another brush with death, and a murderous mother who’s not only overbearing but determined to take permanent possession of Cady’s body. Forced to delve deep into the mystery surrounding her own birth, she must uncover which evil spell her parents cast during her conception…and how to reverse it. Fast. As Cady and her lover Lon embark on a dangerous journey through her magical past, Lon’s teenage son Jupe sneaks off for his own investigation. Each family secret they uncover is darker than the last, and Cady, who has worn many identities—Moonchild, mage, fugitive—is about to add one more to the list.

Praise For Banishing the Dark (The Arcadia Bell series)…

Jenn Bennett is the author of over a dozen books, including the young adult titles Alex, Approximately; Serious Moonlight; Starry Eyes; and The Lady Rogue. She also writes romance and fantasy for adults. Her books have earned multiple starred reviews, been Goodreads Choice Award Nominees, and have been included on annual Best Books lists from Kirkus Reviews and Publishers Weekly. In addition to being a writer, she’s also an artist with a BFA in painting. She was born in Germany, has lived all over the US, and has traveled extensively throughout Europe, China, Taiwan, and Hong Kong. She currently lives near Atlanta with one husband and two dogs.
Loading...
or
Not Currently Available for Direct Purchase