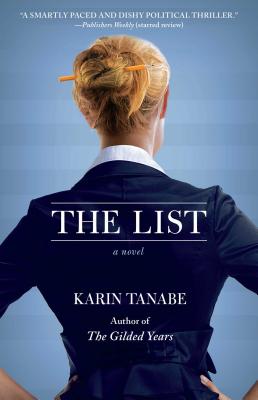 From a former Politico reporter, a fast-paced debut novel about a young journalist at D.C.’s hottest (and most cut-throat) political rag who uncovers a scandal sure to turn the Beltway inside out.

Meet Adrienne Brown, a twenty-eight-year-old Wellesley College grad who recently left her glamorous job at Town & Country for a spot at the Capitolist. Known simply as the List to Beltway insiders, it’s the only media outlet in D.C. that’s actually on the rise. Taking the job means accepting a painful pay cut, giving up perks like free Louboutins, and moving back in with her parents, but Adrienne is certain that her new position will be the making of her career.

And it is—but not at all in the way that she expects. The Capitolist runs at an insane pace: Adrienne’s up before five in the morning, writing ten stories a day (sometimes on her BlackBerry, often during her commute), and answering every email within three minutes. Just when it seems like the frenetic workload is going to break her, she stumbles upon a juicy political affair, involving a very public senator—and her most competitive colleague. Discovering that there’s much more to the relationship than meets the eye, Adrienne realizes she’s got the scoop of a lifetime. But should she go public with the story?

Inspired by Washington insider Karin Tanabe’s experiences at Politico, The List is a riveting debut novel bursting with behind-the-scenes details about what happens when media and politics collide.

“Hildy Johnson would recognize a kindred spirit in 28-year-old Adrienne Brown, a Beltway-bred, New York-trained reporter who sacrifices sleep, sanity, and sex to feed the wonky digital/paper beast the Capitolist – or “The List” as its rabidly ambitious scribes call it. Adrienne slaves in relative obscurity as a “Style section girl” at this Beltway must-read, blasting out celebrity interviews on her never-turned-off Blackberry. But within a month of her arrival, she also stumbles on what will become a blockbuster, front-page story involving List superstar and shrewish White House reporter Olivia Campo. To untangle the details of the hot-sheets affair between the married Olivia and famously family-man U.S. senator—and two mysterious deaths—Adrienne enlists the help of her pushy big sister, Payton. She not only gets a career-boosting story but the respect of her perfect sibling, high-powered parents, and sharp-elbowed peers. Former Politico reporter Tanabe’s roman-a-clef is a hilarious skewering of digital journalism – and how news is tweeted and blogged at a dizzying pace by armies of underpaid and overworked 20-something journos—as well as smartly paced and dishy debut, part political thriller, part surprisingly sweet coming-of-age tale, and part timeless ode to dogged reporters with good instincts and guts of steel. Hildy would be proud.”
— Publishers Weekly, starred review

"A contemporary, politically astute novel that is both wickedly humorous and enticing...[with] complex characters, an intriguing plot, and tightly brilliant execution. When word gets around about The List, readers will clamor for their copy and devour this book."
— New York Journal of Books

“Appealing…everything a die-hard chick-lit fan could want: plenty of fluff, sibling rivalry, deceit and intrigue, and a spunky heroine.”
— Kirkus

"The List is mandatory reading for anyone who wonders about the impact of new media on Washington's political culture. Tanabe has written a novel that is delicious fun and incredibly revealing about life at the intersection of politics and journalism." —Nicolle Wallace, New York Times bestselling author of Eighteen Acres

"Karin Tanabe's energetic, humorous debut is narrated by a young reporter trying to prove herself by chasing the biggest story of the year. The List perfectly captures the frenetic, all-consuming pace of political reporting, with a healthy dose of scandal, glamour and intrigue thrown in. Think The Devil Wears Prada meets Capitol Hill."
— Sarah Pekkanen

Karin Tanabe is the author of A Woman of Intelligence, The Gilded Years, The Price of Inheritance, A Hundred Suns, The Diplomat’s Daughter, and The List. A former Politico reporter, her writing has also appeared in the Miami Herald, Chicago Tribune, Newsday, and The Washington Post. She has made frequent appearances as a celebrity and politics expert on Entertainment Tonight, CNN, and The CBS Early Show. A graduate of Vassar College, Karin lives in Washington, DC. To learn more visit KarinTanabe.com.
Loading...
or support indie stores by buying on