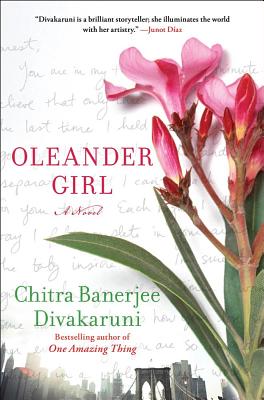 From the bestselling author of One Amazing Thing, a sweeping, suspenseful, atmospheric coming-of-age novel about a young woman who leaves India for America on a search that will transform her life.

Beloved bestselling author Chitra Banerjee Divakaruni has been hailed by Abraham Verghese as a “gifted storyteller” and by People magazine as a “skilled cartographer of the heart.” Now, Divakaruni returns with her most gripping novel yet, a sweeping, suspenseful coming-of-age tale about a young woman who leaves India for America on a search that will transform her life.

THOUGH SHE WAS ORPHANED AT BIRTH, the wild and headstrong Korobi Roy has enjoyed a privileged childhood with her adoring grandparents, spending her first seventeen years sheltered in a beautiful, crumbling old mansion in Kolkata. But despite all that her grandparents have done for her, she is troubled by the silence that surrounds the circumstances of her parents’ death and clings fiercely to her only inheritance from them: the love note she found, years ago, hidden in a book of poetry that had belonged to her mother. As she grows, Korobi dreams of one day finding a love as powerful as her parents’, and it seems her wish has finally come true when she meets the charming Rajat, the only son of a high-profile business family.

Shortly after their engagement, however, a sudden heart attack kills Korobi’s grandfather, revealing serious financial problems and a devastating secret about Korobi’s past. Shattered by this discovery and by her grandparents’ betrayal, Korobi decides to undertake a courageous search across post-9/11 America to find her true identity. Her dramatic, often startling journey will ultimately thrust her into the most difficult decision of her life.

With flawless narrative instinct and a boundless sympathy for her irrepressible characters, in Oleander Girl Divakaruni brings us a perfect treat of a novel— moving, wise, and unforgettable. As The Wall Street Journal raves, “Divakaruni emphasizes the cathartic force of storytelling with sumptuous prose. . . . She defies categorization.”

Chitra Banerjee Divakaruni is the author of sixteen books, including Oleander Girl, The Mistress of Spices, Sister of My Heart, Palace of Illusions, One Amazing Thing, and Before We Visit the Goddess. Her work has appeared in The New Yorker, The Atlantic Monthly, and The New York Times, and has won, among other prizes, an American Book Award. Born in India, she currently lives in Texas and is the McDavid professor of Creative Writing at the University of Houston.

Praise For Oleander Girl: A Novel…

"The heady pace of unfolding events [is] driven by the skill of an acclaimed raconteur at the top of her game. . . . The Kolkata parts of the story are the most entertaining [and] could have come from the pen of a contemporary Jane Austen. . . . Also very pleasing is Divakaruni's use of bathos, a literary form that was raised to an art by Alexander Pope but is sadly out of fashion today. . . . A bang-on read for the summer holidays."

"For those of us who read to escape the banalities of daily life, Chitra Divakaruni's books are oxygen. She wrtes about India in a way that makes the rest of the world disappear around you."

"The bestselling novelist’s latest offering, just in time for summer, is a beautifully crafted coming-of-age tale about Korobi Roy, who goes on a journey of self discovery on a terrain that includes religion, caste and secrets. Written with empathy and elegance, this novel deserves to be at the top of your list."

“The voyage of discovery [Korobi] undertakes, and the secrets, lies and buried tensions she unearths along the way — is the stuff of a classic coming-of-age story, with the added excitement of a quest. . . . Divakaruni's language is lyrical. . . . Rajat's transformation from Prince Charming to a more complex romantic interest is one of the book's more pleasurable aspects. He embodies a struggle between the traditional and the modern, the product of a time and a country that has yet to define itself. Divakaruni’s Kolkata is a teeming cosmopolis, the beating heart of the book.”

“With the present impressive list of publications and her untiring zeal for creating realistic edifices, [Chitra Divakaruni] is sure to go on and on and up and up. . . . Chitra’s maneuvering of her characters and events is almost perfect.”

"Gorgeous. . . [An] elegant and highly evocative new novel from Divakaruni."

"With the barest touch of magical realism, Oleander Girl whisks the reader into the layered intricacies of love affairs, family, Indian social class, racial prejudice and religious tension. . . . [Divakaruni] delivers an absorbing modern fairy tale about an orphan in search of the messy truths of family and love."

"Emotionally compelling. . . . Oleander Girl . . . weaves together many realizations—social and personal. It’s a book that allows you to debate the place of pure emotion as a driving force in life. . . . Divakaruni brings up the generation gap, . . . social status, personal loyalty, Indian mindsets and American realities (ongoing subjects of inquiry in many of her former novels) and serves them with just enough sugar and spice to keep her reader liking the fare."

“Divakaruni is a poet as well as a novelist—a fact on display in this mystery, which unfolds like a time-lapsed lotus. . . . [She] weaves the issues of the caste system, Hindu and Muslim differences, modern Indian women balancing love and duty, and prejudice into the fabric of her story. It’s the smell and feel of Kolkata that resonates long after the book is finished.”

"Chitra Banerjee Divakaruni’s new novel, Oleander Girl, is . . . a showcase for the best-selling author’s ability to maintain her signature, beautifully-crafted prose while creating a complex set of deceptions, ruses, and lies, exposing the dark side of human nature. . . . Skillfully crafted, the novel is a bouquet of collisions that illustrate how choices we make affect more than just ourselves. The past and present clash, as do secrets and truths, needs and wants, old and new India, East and West, wise and unwise decisions. Subplots span two continents and families, and double back on themselves."

"A many-faceted story of discovery . . . Oleander Girl is part mystery, part search, but mostly the story of a young girl finding herself and deciding where she belongs."

"An orphan teen raised by her grandparents in India finds the love she always searched for, but a newly unearthed family secret may interfere."

“Oleander Girl will keep you captivated from the very first chapter. . . . The twists and turns to the story will make you want to read it in one sitting. Beautifully written. As an author, Divakaruni is in a league of her own."

"Oleander Girl is a coming of age novel in the best tradition. . . . Divakaruni's gift is story telling, and she is generous with her gift. Through her wonderful novel we become active participants. . . and grateful witnesses to the maturing of a child into a woman."

"Chitra Divakaruni’s enthralling new novel, Oleander Girl, tells a love story that is more than just that. . . . The many memorable characters that people this novel make it a pleasure to read. [Divakaruni] lavishes as much care on secondary characters as she does on the principals.
[Her] tale is so well-plotted that few will guess the secrets at the heart of this page-turner."

"Divakaruni uses her considerable storytelling skills to full advantage in her new novel."

"Divakaruni explores issues of class and politics in modern India and immigrant America, but the family issues at the heart of the novel give it a cross-cultural appeal. Told with empathy and intelligence, and accompanied by intrigue, the stories--and issues--of the Roy and Bose families should appeal to a broad range of readers."

"An entrancing storyteller with an unerring moral compass, Divakaruni has created a superbly well-plotted, charming, yet hard-hitting novel of family, marriage, and class, a veritable Indian Jane Austen novel spiked with racial prejudice and religious violence. . . . From baneful secrets, poisonous misunderstandings and conflicts, and transcendent love, Divakaruni has forged another tender, wise, and resonant page-turner."

"Oleander Girl is elegant and classic, but also vivid and immediate. Love and loss and secrets collide in this powerful story of the way we live now. There is poetry on these pages, but also the burning-on-both-ends urgency of a page turner. Gorgeous and exciting, this is a wonderful novel."
— Tayari Jones

“When you think of thrilling page turners, you don’t usually think of fluid, graceful prose. But that’s what you’ll find in Oleander Girl. This is the gripping story of a young woman who leaves India in pursuit of a shocking family secret, only to learn far more about herself than she bargained for. It is also a story that bears out the wisdom of something one of the characters says: Never choose something because it’s easier. Chitra Divakaruni is such an elegant writer, one who makes the reader feel not only engaged and entertained, but a bit elevated, too. I’ve been a fan of Divakaruni’s work for a long time; this book keeps me one.”
— Elizabeth Berg

“Compulsively readable, a real page-turner. I found it impossible to set this novel down once I picked it up. Chitra Divakaruni confronts the hard truths about love, loss, grief, redemption and the choices we make, in a family saga that reads like a detective novel.”
— Thrity Umrigar

“Oleander Girl is a riveting and powerful exploration of family secrets, betrayal, love, and ultimately, the search for self. Divakaruni paints colorful characters on a rich tapestry of modern India, all still haunted by the past.”
— Shilpi Somaya Gowda
or
Not Currently Available for Direct Purchase
Copyright © 2020 American Booksellers Association