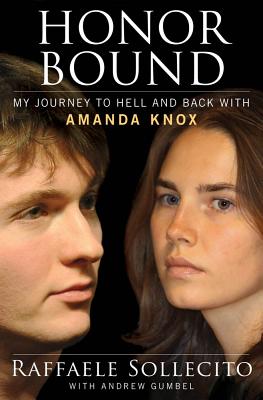 My Journey to Hell and Back with Amanda Knox

They were accused of one of the most infamous murders of our time. Targeted by the media, sentenced by the courts, and wrongfully imprisoned for four excruciating years for a crime neither could fathom let alone perpetrate, Raffaele Sollecito and Amanda Knox were the victims in a trial so bizarre it defied all reason. Now, for the first time since his acquittal, Raffaele reveals what really happened between him and his then girlfriend before, during, and after Amanda’s roommate Meredith Kercher’s brutal murder.

Filled with family drama, wild reversals of fortune, and a blow-by-blow account of the legal catastrophe as it unfolded, this harrowing firsthand account sheds fascinating new light on one of the world’s most controversial murder cases. With startling candor, Raffaele shares intimate details about his changing relationship with Amanda—one that veered in a matter of days from giddy romance to grueling police interrogations. Over the next four years, Raffaele was the only solid alibi Amanda had for the night of the murder. He came under unrelenting pressure—from his own family and lawyers as much as the police and prosecution—to change his testimony and stop vouching for her. But he wouldn’t do it. He refused to testify against her to save his own skin, because he knew she would be lost forever.

Emotional, disturbing, and ultimately galvanizing, this memoir is more than a true-crime story—it is a riveting account of an egregious miscarriage of justice, of public condemnation, and personal survival. Honor Bound is also, at its heart, a tragic love story about a young man who trusted his feelings, refused to give up hope, and ultimately triumphed.

Praise For Honor Bound: My Journey to Hell and Back with Amanda Knox…

"At times witty and often sarcastic, [Raffaele Sollecito] brilliantly rehashes four years of hell, dispelling many theories on what was really going on behind the scenes and shedding an interesting light on what it’s like to be a bit player in a major media show. He is candid and believable … Not only does Sollecito give a great insider’s look at the trial from his unique vantage point, he also clears up a number of mistruths that Knox’s ardent supporters pushed throughout the four-year affair….Sollecito’s book is sure to satisfy."
— The Daily Beast

Raffaele Sollecito was born in Southern Italy. He was a computer science student at the University of Perugia when he and Amanda Knox were first accused of murder in 2007. On October 3, 2011, after four years of trials and appeals, he and Knox were cleared and released. He is now moving on with his life.

Andrew Gumbel is a Los Angeles-based journalist and author. He spent six years in Italy, including stints as a foreign correspondent for Reuters and The Independent. His books include the widely acclaimed Oklahoma City: What The Investigation Missed—And Why It Still Matters.
Loading...
or
Not Currently Available for Direct Purchase