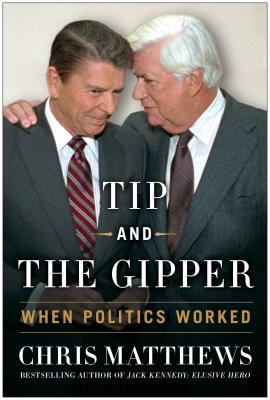 Tip and the Gipper

Tip and the Gipper is a magnificent personal history of a time when two great political opponents served together for the benefit of the country.

TIP AND THE GIPPER is a magnificent personal history of a time when two great political opponents served together for the benefit of the country. Chris Matthews was an eyewitness to this story as a top aide to Speaker of the House Tip O’Neill, who waged a principled war of political ideals with President Reagan from 1980 to 1986. Together, the two men forged compromises that shaped America’s future and became one of history’s most celebrated political pairings—the epitome of how ideological opposites can get things done.

When Ronald Reagan was elected to the presidency in a landslide victory over Jimmy Carter (for whom Matthews had worked as a speechwriter), Speaker O’Neill realized Americans had voted for a change. For the first time in his career, O’Neill also found himself thrust into the national spotlight as the highest-ranking leader of the Democratic Party—the most visible and respected challenger to President Reagan’s agenda of shrinking the government and lowering taxes.

At first, O’Neill doubted his ability to compete on the public stage with the charming Hollywood actor, whose polished speeches played well on TV, a medium O’Neill had never mastered. Over time, the burly Irishman learned how to fight the popular president on his key issues, relying on legislative craftiness, strong rhetoric, and even guerrilla theater. “An old dog can learn new tricks,” Tip told his staff. Of O’Neill, one of his colleagues said, “If Martians came into the House chamber, they’d know instantly who the leader was.”

Meanwhile, President Reagan proved to be a much more effective and savvy leader than his rivals had ever expected, achieving major legislative victories on taxes and the federal budget. Reagan and his allies knew how to work the levers of power in Washington. After showing remarkable personal fortitude in the wake of the assassination attempt against him, Reagan never let his political differences with Democrats become personal. He was fond of the veteran Speaker’s motto that political battles ended at 6 p.m. So when he would phone O’Neill, he would say, “Hello, Tip, is it after six o’clock?”

Together, the two leaders fought over the major issues of the day—welfare, taxes, covert military operations, and Social Security—but found their way to agreements that reformed taxes, saved Social Security, and achieved their common cause of bringing peace to Northern Ireland. O’Neill’s quiet behind-the-scenes support helped Reagan forge his historic Cold War–ending bond with Mikhail Gor­bachev. They each won some and lost some, and through it all they maintained respect for each other’s positions and worked to advance the country rather than obstruct progress.

As Matthews notes, “There is more than one sort of heroic behavior, and they don’t all look the same.” Tip and the Gipper is the story of the kind of heroism we need today.

Praise For Tip and the Gipper: When Politics Worked…

“A superb tribute to the neglected art of compromise.”
— Stanley Crouch

"[A] gripping, behind-the-scenes, first-person account. . . . Though he was a front-row participant in the story, he admirably adopts an even-handed approach (not shying away from pointing out O'Neill's missteps) to serve up his big point: political combat is necessary and important for the nation, but it need not be self-destructive and nuclear. . . . Matthews is providing a public service by recounting an era when even the most ardent partisan gladiators could bend toward pragmatism."
— David Corn

“A fortuitous pairing of subject and author. . . Matthews’s account is pleasant reading, both useful and entertaining. . . The book succeeds in making Boehner’s, or the tea party’s, House look like a confederacy of dunces, addicted to 'government by tantrum.' Praise for Reagan’s skill at reaching across party lines also contrasts with President Obama’s stand-offish image. Their clashes looked feverish at the time, but this book is an invitation to join Tip and the Gipper in tall tales about how grand it was in the old country."
— Howell Raines

"Matthews gives us an engaging, inside perspective (with creditable modesty about his own important role) of the mighty struggle between Ronald Reagan and Speaker Tip O'Neill, and how they bent, when they had to, to the national interest. There are many books written by Reagan's White House staffers, but this is the only account (aside from O'Neill's charming memoir) from inside the Speaker's office, and a valuable addition to American political history."
— John Farrell

Chris Matthews is the host of MSNBC’s Hardball. He is the author of Jack Kennedy—Elusive Hero; Tip and the Gipper—When Politics Worked; Kennedy and Nixon; Hardball; and now Bobby Kennedy: A Raging Spirit.
Loading...
or
Not Currently Available for Direct Purchase