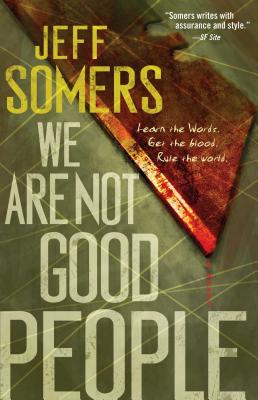 We Are Not Good People (The Ustari Cycle #1) (Paperback)

Learn the Words. Get the blood. Rule the world. The Ustari Cycle starts here.

From the "exhilarating, powerful, and entertaining" (Guardian) storyteller of the Avery Cates series comes a gritty supernatural thriller featuring a pair of unlikely heroes caught up in the underground world of blood magic. Magicians: they are not good people.

The ethics in a world of blood are gray—and an underground strata of blood magicians has been engineering disasters for centuries in order to acquire enough fuel for their spells. Although in the modern world these mages stay in the shadows, their exploits have become no less bloody.

Still, some practitioners use the Words and a swipe of the blade to cast simpler spells, such as Charms and Cantrips to gas up $1 bills so they appear to be $20s. Lem Vonnegan and his sidekick Mags fall into this level of mage, hustlers and con men all. Lem tries to be ethical by using only his own blood, by not using Bleeders or "volunteers." But it makes life hard. Soon they might have to get honest work.

When the pair encounter a girl who's been kidnapped and marked up with magic runes for a ritual spell, it's clear they're in over their heads. Turning to Lem's estranged Master for help, they are told that not only is the girl's life all but forfeit, but that the world's preeminent mage, Mika Renar, has earth-shattering plans for her—and Lem just got in the way. With the fate of the world on the line, and Lem both spooked and intrigued by the mysterious girl, the other nominate him to become the huckleberry who'll take down Renar. But even if he, Mags, and the simpletons who follow him prevail, they're dealing with the kind of power that doesn't understand defeat, or mercy.

(The first portion of We Are Not Good People was originally published in an altered form as Trickster by Pocket Books).

Jeff Somers was born in Jersey City, New Jersey. After graduating college he wandered aimlessly for a while, but the peculiar siren call of New Jersey brought him back to his homeland. Visit him at JeffreySomers.com and WeAreNotGoodPeople.com, and on Twitter at @JeffreySomers.

Praise For We Are Not Good People (The Ustari Cycle #1)…

"Heartbreaking . . . Somers conjures a riveting setting that bends and breaks time and again, each iteration raising the stakes for his accidental hero. By turns frightening and sorrowful, this is a story that offers no good choices to its characters. The ever-present violence is balanced by compassion, which in turn is eroded by the grim fight to save humankind."
— Publishers Weekly (starred review)

Somers writes with assurance and style...just the right mixture of fatalism and attitude, seasoned with plenty of bullets and black comedy.
— SF Site

Jeff Somers has created a wholly original world that, even with magic, feels incredibly real.
— All Things Urban Fantasy

Somers has a crisp writing style...I much prefer his clean kind of story-telling over the common pitfalls of info-dumps and overly-cute dialog.
— Fantasy & SciFi Lovin' Reviews

An exhilarating example of powerful and entertaining storytelling.
— The Guardian on The Electric Church

Enough gunplay and explosions to satisfy a Hollywood producer...but the characters are the real prize.
— Publishers Weekly on The Electric Church

A gritty noir story that challenges and surprises with every page.
— James Rollins on The Electric Church
or
Buy Here
Copyright © 2020 American Booksellers Association