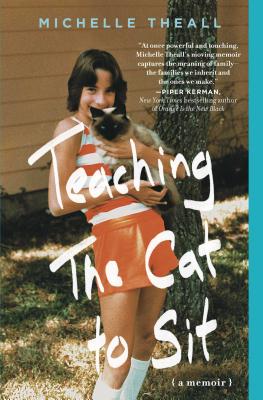 Teaching the Cat to Sit

A compelling memoir of a gay Catholic woman struggling to find balance between being a daughter and a mother raising her son with a loving partner in the face of discrimination.

From the time she was born, Michelle Theall knew she was different. Coming of age in the Texas Bible Belt, a place where it was unacceptable to be gay, Theall found herself at odds with her strict Roman Catholic parents, bullied by her classmates, abandoned by her evangelical best friend whose mother spoke in tongues, and kicked out of Christian organizations that claimed to embrace her—all before she’d ever held a girl’s hand. Shame and her longing for her mother’s acceptance led her to deny her feelings and eventually run away to a remote stretch of mountains in Colorado. There, she made her home on an elk migration path facing the Continental Divide, speaking to God every day, but rarely seeing another human being.

At forty-three years of age and seemingly settled in her decision to live life openly as a gay woman, Theall and her partner attempt to have their son baptized into the Sacred Heart of Jesus Catholic Church in the liberal town of Boulder, Colorado. Her quest to have her son accepted into the Church leads to a battle with Sacred Heart and with her mother that leaves her questioning everything she thought she knew about the bonds of family and faith. And she realizes that in order to be a good mother, she may have to be a bad daughter. Teaching the Cat to Sit examines the modern roles of motherhood and religion and demonstrates that our infinite capacity to love has the power to shape us all.

Praise For Teaching the Cat to Sit: A Memoir…

“In a narrative that deftly moves between past and present, Theall tells the moving story of how she found self-acceptance as a lesbian mother of faith. . . . A searingly honest memoir of faith, sexuality and motherhood.”
— Kirkus Reviews

“An unusually moving memoir of alienation and discrimination. . . . Theall’s heartbreaking and ­heart-affirming coming-of-age, respect-seeking, and truth-telling tale ultimately demonstrates that openness is all.”
— Booklist

“Through unflinching prose, Theall returns to her youth and untangles the complexities of her life. She walks readers through her feelings of insecurity and loss with such sincerity that, were it not for the elegant writing, you might mistake the memoir for a diary. ”
— 5280, The Denver Magazine

“Despite its inherent sadness, Teaching is hard to put down because author Michelle Theall is a first-rate storyteller. .. . The book works because of its deliberateness and its ultimately empowering message of truth to self. For that, and for the great biography it is, Teaching the Cat to Sit is a must-read,especially for those who can relate.”
— Washington Blade

“At once powerful and touching, Michelle Theall’s moving memoir captures the meaning of family—the families we inherit and the ones we make.”
— Piper Kerman, New York Times bestselling author of Orange is the New Black

“A clear-eyed,brave-hearted and utterly unforgettable memoir about life’s big things—love,faith, identity, and justice—and the sometimes ferocious effort it takes to balance them. At this book’s center is a beautifully rendered relationship between a mother and daughter that’s as complicated and memorable as any I’ve ever read. Here is a story told with grace, honesty, and remarkable spirit.”
— Sara Corbett, New York Times bestselling coauthor of A House in the Sky

“Michelle Theall can really write. This is a little story packed with big issues and told with real mastery.”
— Kelly Corrigan, New York Times bestselling author of THE MIDDLE PLACE

“Powerful down to the last page. This book shows the resilience of its author and the universal quest to belong at all costs.”
— Julia Scheeres, New York Times bestselling author of JESUS LAND

“Theall’s written a memoir that is genuinely moving, compelling, and at times, hilarious. As she grapples with the basic questions of family, faith, love, and identity, she expresses with great poignancy the transformative power of love in all its forms.”
— Wendy Lawless, New York Times bestselling author of CHANEL BONFIRE

“Michelle Theall tells the story of learning to fight for her truth and the journey is engaging and evocative. Teaching the Cat to Sit is life under the microscope—a struggling family, the rigid church, the mean kids at school, and the coaches who took the time to care. It’s an emotional ride as this mama bear finds home.”
— Jennifer Wilson, award-winning author of RUNNING AWAY TO HOME

“Teaching the Cat to Sit is a powerful reminder of the ways that discrimination and cruelty still flourish, even as laws shift to recognize more of the LGBT population.Michelle Theall beautifully captures the effects of bigotry on a community, a family, and on an individual psyche both afraid and determined to change.”
— Cris Beam, author of the New York Times Notable book TO THE END OF JUNE

“Teaching the Cat to Sit is about the most important thing of all: unconditional love. Michelle Theall’s beautiful, compassionate book touches on many of today’s thorniest subjects, from marriage equality to adoption to the politics of the Catholic Church, but ultimately hers is a simple tale of parents, children, and the courage that loving one another—and ourselves—truly requires.”
— Buzzy Jackson, award-winning author of SHAKING THE FAMILY TREE

“Michelle Theall is a fighter, and in her warm, courageous, deeply honest, heartbreaking, heart-mending memoir we bear witness to the staggering number of times she gets knocked to her knees, and cheer at increasing volume every time she comes up swinging. This timely reckoning with Catholicism, homosexuality, abuse, adoption, and illness,ultimately gives rise to a celebration of tenacity, forgiveness, and love. Teaching the Cat to Sit could convince the most committed outsider to come inside,and teach the rest of us how best to invite her.”
— Pam Houston, critically acclaimed author of CONTENTS MAY HAVE SHIFTED

“Michelle Theall’s memoir is all heart—painfully and beautifully so—with a moving message about how powerful a mother and church can be—for better or for worse.”
— Lori Duron, critically acclaimed author of RAISING MY RAINBOW

Michelle Theall is an award-winning health, fitness, and travel writer and the founder of Women’s Adventure magazine. Her feature essay in 5280, the inspiration for her memoir, was nominated for a GLAAD Media Award. She lives with her partner, their son, and three dogs, in Boulder, Colorado. Visit MichelleTheall.com.
Loading...
or support indie stores by buying on