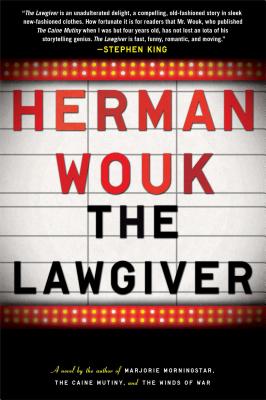 "A lighthearted and delightful tour de force" (The Washington Times).

A romantic and suspenseful epistolary novel about a group of people trying to make a movie about Moses in the present day, The Lawgiver is a story that emerges from letters, memos, e-mails, journals, news articles, Skype transcripts, and text messages.

At the center of The Lawgiver is Margo Solovei, a brilliant young writer-director who has rejected her rabbinical father’s strict Jewish upbringing to pursue a career in the arts. When an Australian multibillionaire promises to finance a movie about Moses, Margo does everything she can to land the job, including reunite with her estranged first love, an influential lawyer with whom she still has unfinished business. Two other key characters in the novel are Herman Wouk himself and his wife of more than sixty years, Betty Sarah, who, almost against their will, find themselves entangled in the movie.

As Wouk and his characters contend with Moses and marriage, the force of tradition, rebellion and reunion, The Lawgiver reflects the wisdom of a lifetime. Inspired by the great nineteenth-century novelists, one of America’s most beloved twentieth-century authors has now written a remarkable twenty-first-century work of fiction.

“…The Lawgiver is a combination of sweet romantic comedy and sly Hollywood satire, and it is as much fun to read as it seems to have been to write….Wouk excels in channeling distinctive voices."
— The Columbus Dispatch (OH)

Herman Wouk was the author of such classics as The Caine Mutiny (1951), Marjorie Morningstar (1955), Youngblood Hawke (1961), Don’t Stop the Carnival (1965), The Winds of War (1971), War and Remembrance (1978), and Inside, Outside (1985). His later works include The Hope (1993), The Glory (1994), A Hole in Texas (2004) and The Lawgiver (2012). Among Mr. Wouk’s laurels are the 1952 Pulitzer Prize for Fiction for The Caine Mutiny; the cover of Time magazine for Marjorie Morningstar, the bestselling novel of that year; and the cultural phenomenon of The Winds of War and War and Remembrance, which he wrote over a fourteen-year period and which went on to become two of the most popular novels and TV miniseries events of the 1970s and 1980s. In 1998, he received the Guardian of Zion Award for support of Israel. In 2008, Mr. Wouk was honored with the first Library of Congress Lifetime Achievement for the Writing of Fiction. He died in 2019 at the age of 103.
Loading...
or
Not Currently Available for Direct Purchase