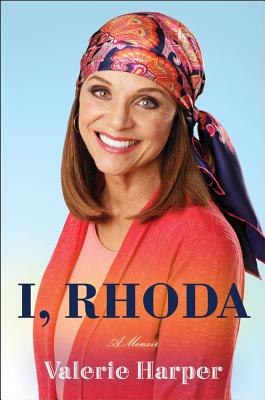 As Mary Richards’s lovable and self-deprecating best friend Rhoda Morgenstern on The Mary Tyler Moore Show, Valerie Harper, too, turned the world on with her smile. Viewers could relate to Rhoda, native New Yorker and struggling working girl, who was unlucky in love and insecure about her weight but who always kept her sense of humor.

Valerie was an unknown actress when she won the part that made her famous, and by the time Rhoda, her popular spin-off show, ended, she had won four Emmys and a Golden Globe. The role was groundbreaking. On-screen, she represented a self-reliant new identity for women of the 1970s while off-screen she fought alongside feminists Gloria Steinem and Bella Abzug for equal rights, among other issues that were important to her.

Valerie’s showbiz journey has taken her from Broadway, where she performed as a dancer and eventually found herself onstage with Lucille Ball and Jackie Gleason, to Hollywood, where she went down in history as one of television’s best-loved characters, and back to the Great White Way, where she recently won a Tony Award nomination for her critically acclaimed role as Tallulah Bankhead. Her inspiring story is laced with triumphs and a few transformative obstacles along the way, but she remains upbeat and funny throughout, always confident that no matter what, she’s going to make it after all.

Valerie Harper is best known for her role as Rhoda Morgenstern on The Mary Tyler Moore Show and on Rhoda. The winner of four Emmys, as well as a Golden Globe for her starring role in Rhoda, Harper has been celebrated by fans and peers alike for her work in television. She currently lives in Los Angeles with her husband.

Praise For I, Rhoda…

"Valerie Harper, my beloved friend, is just as enjoyable on the printed page as she is on the screen. This is a delightful read. Enjoy."
— Betty White

“I, Rosie, loved I, RHODA, Valerie Harper's wonderful new book full of heart and Hollywood, friends and family. I have loved Val since I first saw her standing on Mary's balcony. Her amazing career and her beautiful life are woven together with grace and wit."
— Rosie O'Donnell

“Valerie is brilliant, frigging talented, funny as hell, warm, generous...and her book is a HIT! Detailed, delightful, and delicious—I've found myself starting to read it again!"
— Cloris Leachman

“I am a law-abiding, God-fearing Orthodox Jewish boy, and Valerie Harper is a wanton, out of control, nihilist who I’m sure never thought of God unless his name was on a contract. I thought I knew this wastrel of an actress, but it turns out I didn’t know a thing about her! A regular Jo, she worked her ass off to develop every aspect of her great talent, be it as a twinkle-toed tapper or a fantastic comedic actress with equal dramatic chops. Valerie is a pisser and you gotta read her book!”
— Ed Asner

“Valerie writes in a straight-forward style that is honest and funny and true. I know because I was there during the Rhoda years. It was great fun to relive the moments I was honored and lucky enough to be a part of. I also got to learn things about Valerie I never knew. What a marvelous life and what a wonderful read.”
— Julie Kavner
or
Not Currently Available for Direct Purchase
Copyright © 2020 American Booksellers Association