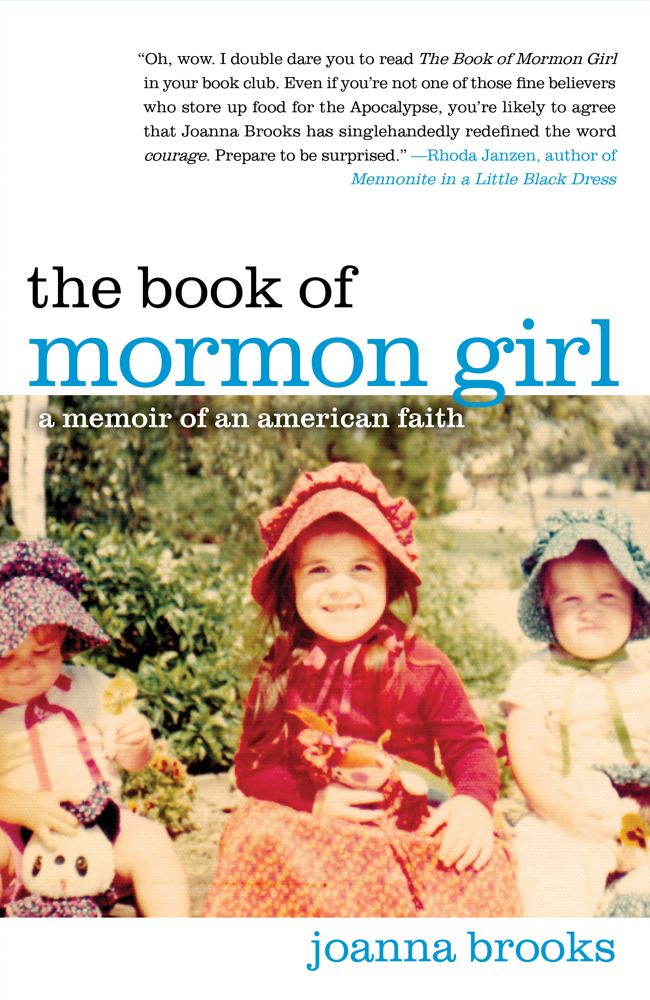 The Book of Mormon Girl

A Memoir of an American Faith

In her sweet, funny, and impassioned memoir The Book of Mormon Girl, Joanna Brooks sheds light onto one of America’s most fascinating but least understood religious traditions.

From her days of feeling like “a root beer among the Cokes”—Coca-Cola being a forbidden fruit for Mormon girls like her—Joanna Brooks always understood that being a member of the Church of Jesus Christ of Latter-day Saints set her apart from others. But, in her eyes, that made her special; the devout LDS home she grew up in was filled with love, spirituality, and an emphasis on service. With Marie Osmond as her celebrity role model and plenty of Sunday School teachers to fill in the rest of the details, Joanna felt warmly embraced by the community that was such an integral part of her family. But as she grew older, Joanna began to wrestle with some tenets of her religion, including the Church’s stance on women’s rights and homosexuality. In 1993, when the Church excommunicated a group of feminists for speaking out about an LDS controversy, Joanna found herself searching for a way to live by the leadings of her heart and the faith she loved.

The Book of Mormon Girl is a story about leaving behind the innocence of childhood belief and embracing the complications and heartbreaks that come to every adult life of faith. Joanna’s journey through her faith explores a side of the religion that is rarely put on display: its humanity, its tenderness, its humor, its internal struggles. In Joanna’s hands, the everyday experience of being a Mormon—without polygamy, without fundamentalism—unfolds in fascinating detail. With its revelations about a faith so often misunderstood and characterized by secrecy, The Book of Mormon Girl is a welcome advocate and necessary guide.

Praise For The Book of Mormon Girl: A Memoir of an American Faith…

“Oh wow. I double dare you to read The Book of Mormon Girl in your book club. Bring a casserole and roll up your sleeves for an original, provocative argument about dissent in faith communities! Even if you’re not one of those fine believers who store up food for the Apocalypse, you’re likely to agree that Joanna Brooks has singlehandedly redefined the word courage. Prepare to be surprised.” –Rhoda Janzen, author of Mennonite in a Little Black Dress

"This gorgeously written, deeply intelligent memoir of an ordinary girlhood in an ordinary Mormon family is one of those most unusual and most valuable of personal stories, simultaneously sweeping and intimate, a book of both broad vision and precise detail. The Book of Mormon Girl is about one particular religious subculture, but it will resonate with anyone who cares about childhood and its echoes in the adult mind of a scholar who’s also a wise and innovative storyteller." --Jeff Sharlet, New York Times bestselling author of The Family and Sweet Heaven When I Die

“Laugh-out-loud funny and break-your-heart poignant. A triumph.”–Carol Lynn Pearson, author of No More Goodbyes: Circling the Wagons Around Our Gay Loved Ones

"Joanna Brooks captures Mormonism in revealing but tender ways that are sure to resonate with insiders and outsiders alike. Mormonism may not yet have found its Chaim Potok, but it has its Joanna Brooks."--R. B. Scott, author of Mitt Romney: An Inside Look at the Man and His Politics

“A compelling memoir of being found and lost and found again. Brooks is a contemporary Mormon pioneer.”–Jana Riess, author of Flunking Sainthood and Mormonism for Dummies

“Disarming, funny, wrenching, and inspiring. This is a quietly fierce, authentic, and faithful voice, one that insists her religious tradition is young, and the next chapter yet to be written.”–Phillip Barlow, Ph.D., Arrington Chair of Mormon History and Culture, Utah State University

"The Book of Mormon Girl is a luminous ode to Brooks' passion for Mormonism, in spite of her church's rejection. It is a memoir written not just for herself, but for others who continue to pursue their faith in the face of abandonment because "No one should be left to feel like she is the only one broken and seeking." --Minneapolis Star Tribune

"A balanced, heartfelt memoir of honoring a faith and a heritage while challenging church teachings." --Shelf Awareness

"Brooks writes with an urgent intimacy reminiscent of Elizabeth Gilbert’s “Eat, Pray, Love,” coating even the most painful memories with a honeyed warmth." --The Boston Globe

"A thought-provoking, conversation-starting memoir for those interested in Mormonism, feminism, and religion in general." --Library Journal

"Joanna writes a beautifully crafted memoir about growing up as a Mormon, how her life as a young kid felt and how it changed over time when she went to college and became a self-proclaimed feminist (not something closely associated with the Mormon Church at the time). The book is a terrific read, especially if you've ever gone through a period in your life where you've questioned your faith and background. You must read it!" --Huffington Post

Joanna Brooks is a national voice on Mormon life and politics, an award-winning scholar of religion and American culture, and the author or editor of five books. She has been featured on American Public Media’s On Being; NPR’s All Things Considered and Talk of the Nation; BBC’s Americana, Interfaith Voices, and Radio West; and in The New York Times, The Washington Post, the CNN Belief Blog, and the Huffington Post. She is senior correspondent for the online magazine ReligionDispatches.org and offers answers to seekers of all stripes at her own site AskMormonGirl.com. Follow @askmormongirl on Twitter, or visit her at JoannaBrooks.org.