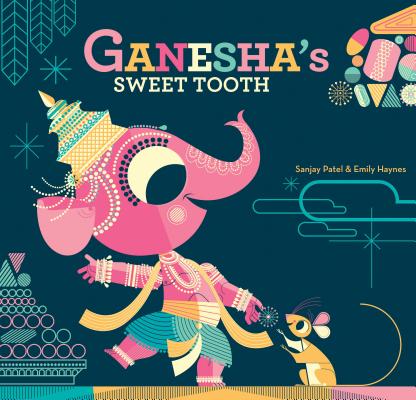 The bold, bright colors of India leap right off the page in this fresh and funny picture book retelling (with a twist) of how Ganesha came to help write the epic poem of Hindu literature, the Mahabharata. Ganesha is just like any other kid, except that he has the head of an elephant and rides around on a magical mouse. And he loves sweets, especially the traditional dessert laddoo. But when Ganesha insists on biting into a super jumbo jawbreaker laddoo, his tusk breaks off! Ganesha is terribly upset, but with the help of the wise poet Vyasa, and his friend Mr. Mouse, he learns that what seems broken can actually be quite useful after all. With vibrant, graphic illustrations, expressive characters, and offbeat humor, this is a wonderfully inventive rendition of a classic tale.

"A confectioner's palette... strong shapes and a mix of modern objects with traditional designs add to the fun." - Kirkus Reviews
—-

"A feast for the eyes... So sweet we almost want to pop it in our mouths." - EntertainmentWeekly.com
—-

"A fresh and comedic introduction to a Hindu legend, with a winning combination of both eye candy and actual candy." - Publishers Weekly
—-

Sanjay Patel is an animator and storyboard artist for Pixar Animation Studios, where he has worked on many features including A Bug's Life, Ratatouille, and the Cars series. Sanjay is also the creator of Ramayana: Divine Loophole, The Big Poster Book of Hindu Deities, and The Little Book of Hindu Deities. His modern interpretations of Hindu epics have been exhibited at the San Francisco Asian Art Museum. He lives in Oakland, California.

Emily Haynes is an editor by day, specializing in entertainment and humor titles, and a children's writer by night. In her spare time she can often be found up to her elbows in clay, making functional ceramics. This is her first children's book. She lives in Oakland, California.
Loading...
or support indie stores by buying on