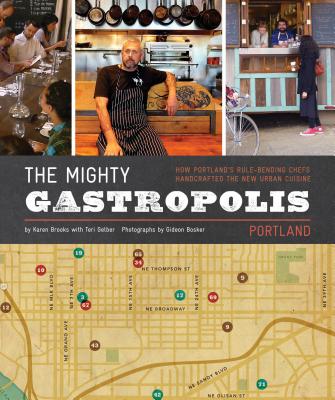 Portland: A Journey Through the Center of Americas New Food Revolution

The Mighty Gastropolis: A Journey Through the Center of America's Food Revolution charts the rise of one of the country's most talked about food and dining destinations, Portland, Oregon, a place former Gourmet Editor and food icon Ruth Reichl calls "the crucible of New American cooking."

The author goes deep behind the scenes to explore the kitchens, personal lives, and mindsets of Portland's celebrated cooks to chronicle, with humor and panache, a people's army of maverick chefs, artisans, obsessives, farmers, food carters, and plucky pioneers who have created a risk-taking, no rules food town unlike any other: one that is exporting its culinary ethos, innovations, and sensibilities to America's gastronomic power zones in New York, LA, Chicago, and countless other cities that are coming under its spell: a spell and culinary imagination that, according to Bon Appetit Restaurant and Drinks Editor, Andrew Knowlton, emanates from "a city thriving with creativity, passion, and an anything-goes attitude for all things edible."

Among Portland chefs whose work, culinary output, and cooking pearls are profiled in this book are those whose rise-to-stardom stories, picture-perfect dishes, and iconoclastic innovations now slather the pages of Bon Appetit, Saveur, The New York Times, The Wall Street Journal, Food and Wine, GQ and The Huffington Post; as well as the Food Channel. The authors introduce you to Pok Pok's Andy Ricker, a pioneering, chicken wingmeister who gambled all on a Thai chicken shack in his front yard and now rules the roost in New York; and Le Pigeon's Gabriel Rucker, the freewheeling flavor genius (and James Beard Rising Star 2011) who power drills lamb heads in his basement like a hit man in Goodfellas. You'll also encounter the artisanal know-how at Olympic Provisions, whose chefs have spawned their own Slow Salumi movement; and chocolatier David Briggs, whose nationally celebrated Raleigh Bar-he makes them in the storeroom of a cult sandwich shop-has re-imagineered the iconic Snickers bar, catapulting this salted caramel-meets-pecan and chocolate nougat confection into a new galaxy of pleasure, prompting Bon Appetit's Andrew Knowlton to fawn, "the best chocolate candy I've had."

In The Mighty Gastropolis, you will learn, ingredient by ingredient, experiment by experiment, dish by dish, how Portland's culinary cognoscenti have re-imagined and reconfigured restaurant culture for modern times and established a new paradigm for how to succeed in the fiercely competitive, no-chops-barred worlds of both hi- and lo-fi dining. The result, as Thomas Lauderdale, founder of Pink Martini, explains," is a hilarious, heart-warming, punk-rock portrait of a daringly creative Mecca showing the rest of America a better way to eat-and live."

This is a landmark contribution to the literature of food. And, perhaps best of all, the book's recipes are roadmaps to rarified states of gastro-nirvana.

Karen Brooks is the author of eight food and pop culture books and former "most scooptastic" Oregonian food writer. She is currently the restaurant critic and dining editor of Portland Monthly magazine.

Gideon Bosker is a writer and photographer who lives in many places, including Portland, Oregon. With Karen Brooks, he is the co-author of the cult classics Patio Daddy-O, Atomic Cocktails and Dude Food.

Praise For The Mighty Gastropolis: Portland: A Journey Through the Center of Americas New Food Revolution…

"Ever wonder how Portland, Oregon, became one of America's top food cities almost overnight? Who better to tell the pork-filled, caffeine-fueled, unconventional story than the Rose City's biggest fan and insatiable eater Karen Brooks. By profiling food cart rebels, supper club renegades, and local chef heroes, Brooks paints a vivid picture of a city thriving with creativity, passion, and an anything-goes attitude for all things edible. Brooks isn't just a chronicler of her city's food revolution-she (and this book) are a part of it." - Andrew Knowlton, Bon Appétit Restaurant and Drinks Editor

"Scattered among the book's richly photographed pages are 50 of Portland's most obsessed-over recipes. I imagine the original version of Tastebud's Original Berry Cobbler -- made with Oregon berries and baked in a wood-fired oven-is truly divine, but even with supermarket fruit, this was awesome." - Kimberly Masibay, Fine Cooking magazine

"Karen Brooks, the definitive writer on Portland's food scene, makes a mighty case that our culinary neighbors have more than a food scene, they have a revolution. The Mighty Gastropolis uses chef profiles, essays and pivotal recipes to argue that Portland's wild, "casual gastronomy" provides fine food to a mass audience in a way that no other American city does." - Rebekah Denn, Seattle Times

"Foie gras, grilled pigeon, and the tastiest fried egg sandwich around: It's all here in Karen Brooks's lively account of America's new great food city. Oh, and there are 50 terrific recipes, too." - James Oseland, editor-in-chief of Saveur and author of Cradle of Flavor

Street food capital of the world, home of ethical eaters, dreamers in a strange food landscape, Portland is the crucible of new American cooking. If you're curious about why we're eating the way we do - and how we'll be eating tomorrow - you need to read this book. Passionate, powerful and filled with recipes that make you very, very hungry, The Mighty Gastropolis is a celebration of America's most interesting food city. " - Ruth Reichl, Editor, Modern Library Food Series

"An insider's tour of a city where the only use for a Michelin star is to have it dipped in chocolate or fried in duck fat. If you want to explore the ingenius outsider cooks, the obsessive impulses, and the raging gustatory dishes behind America's newest food capitol, Karen Brooks is your guide." - Mike Thelin, commentator for Unique Eats, The Cooking Channel, and co-founder of Feast Portland

"By the book's end, you'll have plotted a new eating itinerary, with stops for Le Pigeon's beef cheek Bourguignon, Tastebud's pizza or the Sugar Cube's brownie sundae. For out-of-towners, the book jacket doubles as a map of Portland's dining destinations." - Michael Russell, The Oregonian

"Brooks, Bosker, and Gelber don't just guide you through Portland's food revolution through their vivid descriptions. They introduce you to every player behind it . . . with personal remarks, recipes, and tips. If you find yourself salivating just as much as we are but can't afford a flight to Portland just yet, The Mighty Gastropolis is the next best thing." - ANNE DOLCE, The Daily Meal

"Brooks offers a keen insight and an almost literary style that sets her apart from most food writers." - The Oregonian
or
Not Currently Available for Direct Purchase
Copyright © 2020 American Booksellers Association