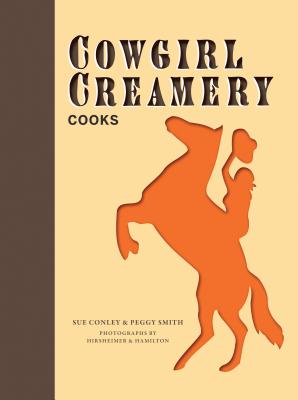 Collecting the vast accumulated wisdom of two of the world's great cheesemakers, Cowgirl Creamery Cooks is one of those rare books that immediately asserts itself as an indispensible addition to the food lover's library. That's because Cowgirl Creamery Cooks is many things. It's an engrossing read that shares the story of the Cowgirls, but also of the rise of the organic food movement and creating an artisanal creamery. It's a primer on tasting, buying, storing, pairing, and appreciating all kinds of cheese that makes this a gorgeous gift for the cheese lover. And it's a sumptuous collection of recipes, with 75 appetizers, soups, salads, snacks, entrees, and desserts that showcase cow-, goat-, and sheep-milk cheese. Throughout, the glorious photographs of Hirsheimer & Hamilton portray myriad cheeses, finished dishes, and the landscapes and people who created them.

"Peggy and Sue are such wonderful teachers with a unique and very special style. I absolutely love seeing their vision and brilliance come to life in this gorgeous and inspiring book. It makes me want to eat more cheese, head to Point Reyes, and soak up their Cowgirl genius!" -- Suzanne Goin, chef/owner of Lucques, A.O.C. and Tavern.

Cowgirl Creamery launched in 1997, but the story of the Cowgirls began well before then. Sue Conley and Peggy Smith met freshman year at the University of Tennessee where, little did they know, a lifelong friendship and infatuation with food would ensue. In 1976 their journey westward began when they drove from the East Coast to San Francisco. Once arriving in the Bay Area, they became involved in the burgeoning food movement. Smith worked at Chez Panisse and was a chef at the restaurant when it's adjoining cafe opened while Conley co-founded Bette's Diner, both of which are still Berkeley institutions By the early 1990s, Conley and Smith were ready for a new challenge. With their first hand knowledge of the restaurant business, they launched Tomales Bay Foods, a marketing vehicle to help West Marin's farms and dairies get their delicious products into the hands of the Bay Area's finest chefs. From there, they decided to make their own cheese using the milk from neighboring Straus Family Creamery. Two decades, dozens of awards (including induction into the Guilde des Fromagers), two creameries, four retail stores, and two thousand tons of cheese later, it is apparent that these Cowgirls have helped to pioneer the American artisan cheese movement.

Photographs by Canal House bring life and color to the Cowgirl Creamery story and recipes. Christopher Hirsheimer and Melissa Hamilton are the dynamic duo behind the Canal House. Hirsheimer, one of the founders and former Executive Editor at Saveur Magazine, and Hamilton, one of the former food editors at the magazine, joined forces in 2007 to write, photograph and self-publish a quarterly magazine and daily blog that celebrates simple, seasonal cooking and the joys of eating. Hirsheimer and Hamilton published their first book, Canal House Cooks Everyday, in the fall of 2012. It is inspired by their daily blog and offers a year of seasonal recipes for the home cook.
Loading...
or
Not Currently Available for Direct Purchase