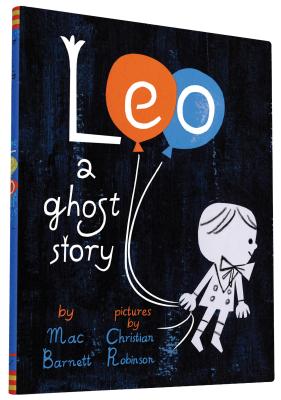 A New York Times Best Illustrated Book of 2015
You would like being friends with Leo. He likes to draw, he makes delicious snacks, and most people can't even see him. Because Leo is also a ghost. When a new family moves into his home and Leo's efforts to welcome them are misunderstood, Leo decides it is time to leave and see the world. That is how he meets Jane, a kid with a tremendous imagination and an open position for a worthy knight. That is how Leo and Jane become friends. And that is when their adventures begin. This charming tale of friendship—from two of the best young minds in picture books: the author of the Caldecott Honor–winning Extra Yarn and the illustrator of the Bologna Ragazzi Award–winning Josephine—is destined to become a modern classic that will delight readers for years to come.

Praise For Leo: A Ghost Story…

"One of the most exciting picture books of 2015."--Kirkus Reviews

"This gentle tale of friendship and acceptance is feather-light yet enchanting enough to be read over and over."--The Washington Post

"Don't be afraid: This is a ghost story that will warm your heart."--BookPage

"Offers comfort to any child who shares life with that one constant imaginary friend."--School Library Connection

"There is nothing spooky about this moving story of friendship, acceptance, and belonging."--Boston Globe

"One of the year's best picture books."--Julie Danielson, Seven Impossible Things Before Breakfast

"The story has a light touch, but there's so much depth: a fearful ghost, a take-charge girl, and interracial friendship, and a tale in which fear is integrally and sweetly tied to positive qualities of imagination."--The New York Times

"A tender, touching story of friendship and the power of imagination."-Booklist, starred review

" A terrific little story about an unwanted ghost that finds a new friend."--Design Mom

Kirkus Reviews Best Picture Books of the Year About Friendship

"Defends the joy of invisible playfellows with captivating artwork and text that is a pleasure to read aloud."-- Wall Street Journal

"An enchanting tale that will linger in the memories of all who read (or hear) it."--Books4YourKids

Mac Barnett is the New York Times bestselling author of many picture books, including Telephone and Extra Yarn, which won a Caldecott Honor, the Boston Globe–Horn Book Award, and the E.B. White ReadAloud Award. Mac lives in Berkeley, California.