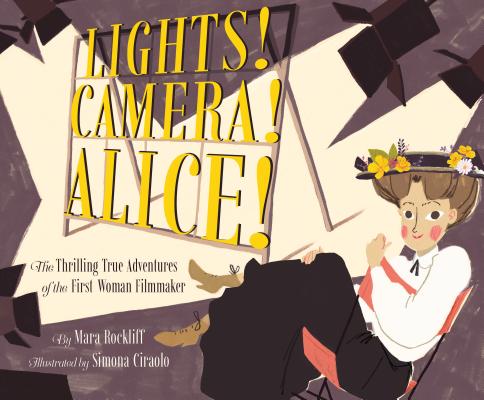 Meet Alice Guy-Blaché. She made movies—some of the very first movies, and some of the most exciting! Blow up a pirate ship? Why not? Crawl into a tiger's cage? Of course! Leap off a bridge onto a real speeding train? It will be easy! Driven by her passion for storytelling, Alice saw a potential for film that others had not seen before, allowing her to develop new narratives, new camera angles, new techniques, and to surprise her audiences again and again. With daring and vision, Alice Guy-Blaché introduced the world to a thrilling frontier of imagination and adventure, and became one of filmmaking's first and greatest innovators. Mara Rockliff tells the story of a girl who grew up loving stories and became an acclaimed storyteller and an inspiration in her own right.

"Subtly STEM, fun, and beautiful to look at... encourages kids to engage with cutting-edge technology and to innovate in new fields" -School Library Journal, starred review

"In Alice Guy-Blaché, Rockliff finds that holy grail of picture book biographies-a well-documented life of a fascinating woman who has been overlooked." —Bulletin of the Center for Children's Books

"Rockcliffe tells her amazing story with taste and verve and relates how she turned a disaster into a brilliant career." —The Mercury News

"Young readers will. undoubtedly be inspired by her moxie." —Booklist

"Set up like both a picture book and an old-fashioned movie with dramatic titles, this biography captures the gumption of a French girl named Alice who envisioned telling stories using newly invented movie cameras on a big screen with color and sound." —Imagination Soup

Mara Rockliff has authored many books for children, including: Anything But Ordinary Addie: The True Story of Adelaide Herrmann, Queen of Magic; Around America to Win the Vote; and Mesmerized: How Ben Franklin Solved a Mystery that Baffled All of France. She lives in Pennsylvania.

Simona Ciraolo is a children's book author and illustrator. She grew up in Italy where she received a degree in animation from the National Film School. She also earned an MA in children's book illustration at Cambridge. She lives in London.
Loading...
or support indie stores by buying on
(This book is on backorder)