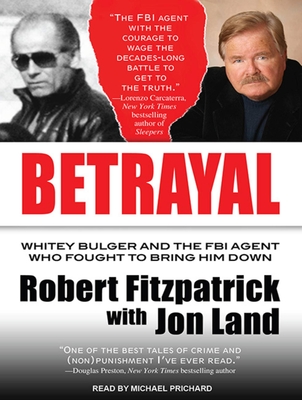 The Jack Nicholson film The Departed didn't tell half of their story. A poor kid from the slums, Robert Fitzpatrick grew up to become a stellar FBI agent and challenge the country's deadliest gangsters. Relentless in his desire to catch, prosecute, and convict Whitey Bulger, Fitzpatrick fought the nation's most determined cop-gangster battle since Melvin Purvis hunted, confronted, and killed John Dillinger. In his crusade to bring Bulger to justice, Fitzpatrick faced not only Whitey but also corrupt FBI agents, along with political cronies and enablers from Boston to Washington who, in one way or another, blocked his efforts at every step. Even when Fitzpatrick discovered the very organization to which he had sworn allegiance was his biggest obstacle, the agent continued to pursue Whitey and his gang . . . knowing that they were prepared to murder anyone who got in their way.

Robert Fitzpatrick served more than twenty years as an FBI agent and chief in a career highlighted by his involvement in the Martin Luther King, Jr., killing and the ABSCAM investigation in Miami that resulted in the indictments of numerous public officials. Jon Land is the acclaimed author of many bestsellers, including "The Last Prophecy" and "Blood Diamonds."

Michael Prichard is a professional narrator and stage and film actor who has played several thousand characters during his career. An Audie Award winner, he has recorded well over five hundred books and has earned several "AudioFile" Earphones Awards. Michael was also named a Top Ten Golden Voice by "SmartMoney" magazine.

"An essential [listen] for those interested in the history of crime investigation and techniques used in modern-day law enforcement." ---Library Journal