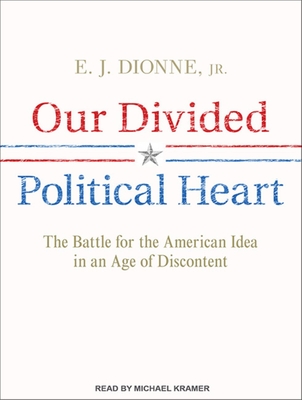 Our Divided Political Heart will be the must-listen book of the 2012 election campaign. Offering an incisive analysis of how hyper-individualism is poisoning the nation's political atmosphere, E. J. Dionne Jr., argues that Americans can't agree on who we are because we can't agree on who we've been, or what it is, philosophically and spiritually, that makes us Americans. Dionne takes on the Tea Party's distortions of American history and shows that the true American tradition points not to radical individualism, but to a balance between our love of individualism and our devotion to community.Dionne offers both a fascinating tour of American history-from the Founding Fathers to Clay and Lincoln and on to the Populists, the Progressives, and the New Dealers-and also an analysis of our current politics that shatters conventional wisdom. The true American idea, far from endorsing government inaction or indifference, has always viewed the federal government as an active and constructive partner with the rest of society in promoting prosperity, opportunity, and American greatness.The ability of the American system to self-correct is its greatest asset, and Dionne challenges progressives to embrace the American story. Our fractious but productive past offers us the resources both to rediscover the idea of progress and to put an end to our fears of decline. Our Divided Political Heart will be required listening for all who seek a path out of our current impasse.

E. J. Dionne, Jr., is an American journalist and political commentator and a long-time op-ed columnist for the "Washington Post." His published works include the influential bestseller "Why Americans Hate Politics," "Souled Out," and "Stand Up, Fight Back."

"Tea Partiers and Occupiers alike may be surprised and enlightened by this lucid analysis, all the more convincing for its sympathetic treatment of both sides of the argument." ---Publishers Weekly