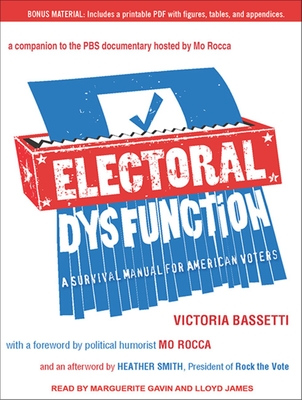 Imagine a country where the right to vote is not guaranteed by the Constitution, where the candidate with the most votes loses, and where paperwork requirements and bureaucratic bungling disenfranchise millions. You're living in it. If the consequences weren't so serious, it would be funny.An eye-opening, fact-filled companion to the forthcoming PBS documentary starring political satirist and commentator Mo Rocca, Electoral Dysfunction illuminates a broad array of issues, including the Founding Fathers' decision to omit the right to vote from the Constitution and the legal system's patchwork response to this omission; the battle over voter ID, voter impersonation, and voter fraud; the foul-ups that plague Election Day, from ballot design to contested recounts; the role of partisan officials in running elections; and the antidemocratic origins and impact of the Electoral College. The book concludes with a prescription for a healthy voting system by Heather Smith, president of Rock the Vote.Published in the run-up to the 2012 election, Electoral Dysfunction is for listeners across the political spectrum who want their votes to count.

The author of "Electoral Dysfunction," Victoria Bassetti has worked with legislative and judicial bodies of the U.S. government, including serving as chief counsel/staff director to a subcommittee of the U.S. Senate Judiciary Committee.

Marguerite Gavin has recorded over three hundred audiobooks in nearly every genre. A nominee for the prestigious Audie Award, she was won both "AudioFile" Earphones and "Publishers Weekly" Listen-Up Awards. "AudioFile" magazine says "Marguerite Gavin . . . has a sonorous voice, rich and full of emotion."