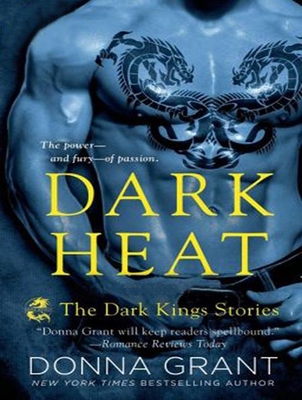 The Dark Kings are sworn to defend an ancient legacy of dragon magic. But their fiercest challenge lies in the modern world, where a woman's love conquers all. These are their stories. Dark Heat gathers together these favorite stories of Donna Grant's Dark Kings. "Dark Craving": Fueled by ancient magic-and enflamed by human desire-the Dragon King known as Hal can transform himself at will into one of the legendary winged creatures he is sworn to protect. But one thing he can never do is fall in love . . . with a mortal woman. "Night's Awakening": The dark immortal warriors were never meant to experience human desire. But when Guy, a member of an ancient order of shapeshifting warriors, meets Elena-a mere mortal whose beauty and blind ambition shakes him to his core-all bets are off . . . "Dawn's Desire": For centuries, the Dragon Kings have hidden their shapeshifting powers from the world. But when a mortal enemy threatens to expose them, the warrior Banan must leave his secret lair in the Highlands to risk his life for the dragons within-and resist the temptations of human love. "Passion's Claim": Banan has been waiting for centuries for someone like Jane. Guy knew it was love at first sight with Elena. Can two Dragon Kings commit to two immortal women for eternity? Or does fate have something else in store?

Antony Ferguson, a native of London, England, is a classically trained actor and has appeared in numerous productions in London, Off Broadway, and Regional theater. As a voice actor, he has over fifty audiobooks to his credit.
Loading...
or support indie stores by buying on