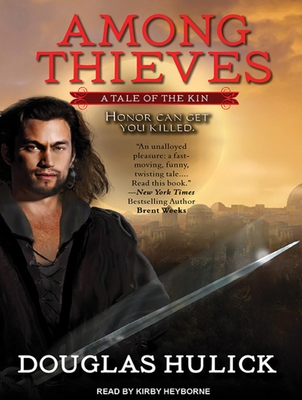 A Tale of the Kin

Ildrecca is a dangerous city, if you don't know what you're doing. It takes a canny hand and a wary eye to run these streets and survive. Fortunately, Drothe has both. He has been a member of the Kin for years, rubbing elbows with thieves and murderers from the dirtiest of alleys to the finest of neighborhoods. Working for a crime lord, he finds and takes care of trouble inside his boss's organization--while smuggling relics on the side.But when his boss orders Drothe to track down whoever is leaning on his organization's people, he stumbles upon a much bigger mystery. There's a book, a relic any number of deadly people seem to be looking for--a book that just might bring down emperors and shatter the criminal underworld.A book now inconveniently in Drothe's hands...

Douglas Hulick is a stay-at-home dad who holds a B.A. and M.A. in medieval history.

Praise For Among Thieves: A Tale of the Kin…