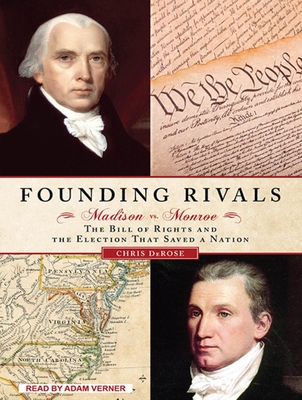 In 1789, James Madison and James Monroe ran against each other for Congress--the only time that two future presidents have contested a congressional seat.But what was at stake, as author Chris DeRose reveals in Founding Rivals: Madison vs. Monroe, the Bill of Rights, and the Election That Saved a Nation, was more than personal ambition. This was a race that determined the future of the Constitution, the Bill of Rights, the very definition of the United States of America.Friends and political allies for most of their lives, Madison was the Constitution's principal author, Monroe one of its leading opponents. Monroe thought the Constitution gave the federal government too much power and failed to guarantee fundamental rights. Madison believed that without the Constitution, the United States would not survive.It was the most important congressional race in American history, more important than all but a few presidential elections, and yet it is one that historians have virtually ignored. In Founding Rivals, DeRose, himself a political strategist who has fought campaigns in Madison and Monroe's district, relives the campaign, retraces the candidates' footsteps, and offers the first insightful, comprehensive history of this high-stakes political battle.DeRose reveals: - How Madison's election ensured the passage of a Bill of Rights--and how Monroe's election would have ensured its failure- How Madison came from behind to win a narrow victory (by a margin of only three hundred and thirty-six votes) in a district gerrymandered against him- How the Bill of Rights emerged as a campaign promise to Virginia's evangelical Christians- Why Madison's defeat might have led to a new Constitutional Convention--and the breakup of the United StatesFounding Rivals tells the extraordinary, neglected story of two of America's most important Founding Fathers. Brought to life by unparalleled research, it is one of the most provocative books of American political history you will listen to this year.

Praise For Founding Rivals: Madison vs. Monroe, the Bill of Rights, and the Election That Saved a Nation…

"A lively, clear-cut study of the myriad hurdles and uncertainty that characterized the first attempts to form the U.S. government." ---Kirkus

Adam Verner is a full-time narrator and voice talent with over one hundred titles recorded. He is the recipient of "AudioFile" Earphones Awards for "Pavilion of Women" by Pearl S. Buck and "The Big It" by A. B. Guthrie, Jr.
Loading...
or
Not Currently Available for Direct Purchase