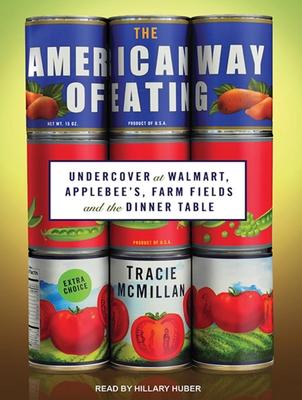 What if you can't afford nine-dollar tomatoes? That was the question award-winning journalist Tracie McMillan couldn't escape as she watched the debate about America's meals unfold, one that urges us to pay food's true cost--which is to say, pay more. So in 2009 McMillan embarked on a groundbreaking undercover journey to see what it takes to eat well in America. For nearly a year, she worked, ate, and lived alongside the working poor to examine how Americans eat when price matters.From the fields of California, a Walmart produce aisle outside of Detroit, and the kitchen of a New York City Applebee's, McMillan takes us into the heart of America's meals. With startling intimacy she portrays the lives and food of Mexican garlic crews, Midwestern produce managers, and Caribbean line cooks, while also chronicling her own attempts to live and eat on meager wages. Along the way, she asked the questions still facing America a decade after the declaration of an obesity epidemic: Why do we eat the way we do? And how can we change it? To find out, McMillan goes beyond the food on her plate to examine the national priorities that put it there. With her absorbing blend of riveting narrative and formidable investigative reporting, McMillan takes us from dusty fields to clanging restaurant kitchens, linking her work to the quality of our meals--and always placing her observations in the context of America's approach not just to farms and kitchens but to wages and work.The surprising answers that McMillan found on her journey have profound implications for our food and agriculture, and also for how we see ourselves as a nation. Through stunning reportage, Tracie McMillan makes the simple case that--city or country, rich or poor--everyone wants good food. Fearlessly reported and beautifully written, The American Way of Eating goes beyond statistics and culture wars to deliver a book that is fiercely intelligent and compulsively readable. Talking about dinner will never be the same again.

Tracie McMillan, a former managing editor of the award-winning magazine "City Limits," has written about food and class for a variety of publications, including the "New York Times," "Harper's Magazine," and "Slate."

Hillary Huber garners consistently glowing reviews for her audio work. She has earned several Audie Award nominations, including for "A Field of Darkness" by Cornelia Read, and she is also an "AudioFile" Earphones Award winner. "AudioFile" magazine says, "Hillary Huber's narration is lyrical enough to be set to music."