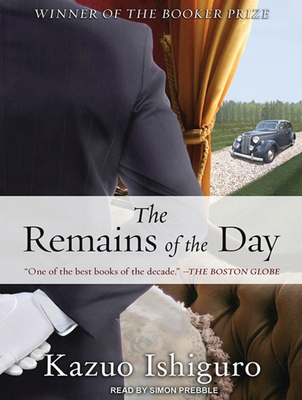 The Remains of the Day

The Remains of the Day is a profoundly compelling portrait of the perfect English butler and of his fading, insular world in post-war England. At the end of his three decades of service at Darlington Hall, Stevens embarks on a country drive, during which he looks back over his career to reassure himself that he has served humanity by serving a great gentleman. But lurking in his memory are doubts about the true nature of Lord Darlington's greatness and graver doubts about his own faith in the man he served.

One of "AudioFile" magazine's Golden Voices, Simon Prebble has received over twenty Earphones Awards and five Listen-Up Awards, and he has been a finalist fourteen times for an Audie Award. In 2006, "Publishers Weekly" named him Narrator of the Year, and he was named "Booklist"'s 2010 Voice of Choice.
Loading...
or
Not Currently Available for Direct Purchase