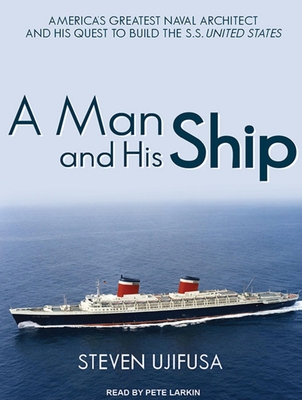 At the peak of his power, in the 1940s and 1950s, William Francis Gibbs was considered America's best naval architect. His quest to build the finest, fastest, most beautiful ocean liner of his time, the S.S. United States, was a topic of national fascination. When completed in 1952, the ship was hailed as a technological masterpiece at a time when "made in America" meant the best.Gibbs was an American original, on par with John Roebling of the Brooklyn Bridge and Frank Lloyd Wright of Fallingwater. Forced to drop out of Harvard following his family's sudden financial ruin, he overcame debilitating shyness and lack of formal training to become the visionary creator of some of the finest ships in history. He spent forty years dreaming of the ship that became the S.S. United States.William Francis Gibbs was driven, relentless, and committed to excellence. He loved his ship, the idea of it, and the realization of it, and he devoted himself to making it the epitome of luxury travel during the triumphant post-World War II era. Biographer Steven Ujifusa brilliantly describes the way Gibbs worked and how his vision transformed an industry. A Man and His Ship is a tale of ingenuity and enterprise, a truly remarkable journey on land and sea.

"In his debut, Ujifusa harks back to a time when men were men, and transatlantic ships were serious business . . . Written with passion and thoroughness, this is a love letter to a bygone time and the ships that once ruled the seas." ---Publishers Weekly Starred Review

Steven Ujifusa, the author of "A Man and His Ship," serves on the Advisory Council of the S.S. United States Conservancy.