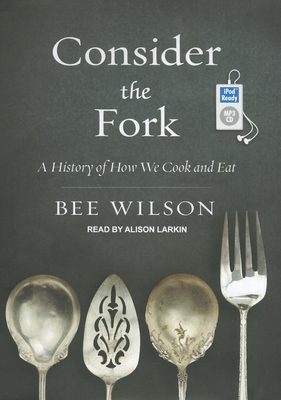 A History of How We Cook and Eat

“Interest in the evolution of human food culture has always been popular. In Consider the Fork, Wilson invites readers to examine this evolution in a new light. She discusses the transformation of kitchen tools and utensils throughout human existence as well as the implications these transformations have on how humans cook and eat. Wilson's air of curiosity and amusement makes for an enjoyable read; pots and pans have never been more interesting, and the intermingling of anthropology, history, and sociology is certain to spark further thought next time a spork or a blender is encountered.”
— Lucy Beeching, Avid Bookshop, Athens, GA
View the List

Since prehistory, humans have braved the business ends of knives, scrapers, and mashers, all in the name of creating something delicious-or at least edible. In Consider the Fork, award-winning food writer and historian Bee Wilson traces the ancient lineage of our modern culinary tools, revealing the startling history of objects we often take for granted. Charting the evolution of technologies from the knife and fork to the gas range and the sous-vide cooker, Wilson offers unprecedented insights into how we've prepared and consumed food over the centuries-and how those basic acts have changed our societies, our diets, and our very selves.

Praise For Consider the Fork: A History of How We Cook and Eat…

"Wilson is erudite and whip-smart, but she always grounds her exploration of technological change in the perspective of the eternal harried cook---she's been one---struggling to put a meal on the table. This is mouthwatering history: broad in scope, rich in detail, stuffed with savory food for thought." ---Publishers Weekly Starred Review

Bee Wilson is a food writer, historian, and author of three books, including "Swindled: The Dark History of Food Fraud, from Poisoned Candy to Counterfeit Coffee" and "The Hive: The Story of the Honeybee and Us."

An "AudioFile" Earphones Award winner, Alison Larkin is a classically trained actress who has appeared on Broadway with the Royal National Theatre and Off-Broadway with the Royal Shakespeare Company. Her bestselling novel "The English American" made the top ten list of best author audiobook narrations of all time.
Loading...
or
Not Currently Available for Direct Purchase