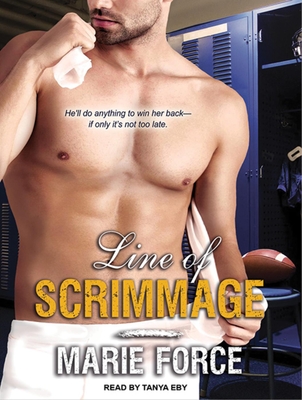 Susannah finally has a peaceful, calm life and a no-surprises man. Marriage to football superstar Ryan Sanderson was a whirlwind of passion, heat, energy, and excitement, but Susannah got sick of playing second fiddle to his team, watching women throwing themselves at him, and living in terror of the hard hits he took on the field. With their divorce just days from being final, she's already planning a wedding with her new fiance . . .Ryan has just ten days to convince his soon-to-be ex-wife to give him a second chance. He has just brought home his third championship and his career is at its pinnacle, but during the year of their separation, Ryan's come to realize it doesn't mean anything at all without Susannah . . .

Praise For Line of Scrimmage…

"With its humor and endearing characters, Forces' charming novel will appeal to a broad spectrum of [fans]." ---Booklist

Marie Force is the "USA Today" bestselling, award-winning author of many contemporary romances, including the McCarthys of Gansett Island series, the Fatal series, the Treading Water books, and several stand-alone titles.

Tanya Eby is an Audie-nominated narrator. "AudioFile" magazine says, "Listening to Tanya Eby is like listening to a full-cast recording." Besides narrating, Tanya blogs and works on her own novels. She has published four novels and is at work on her fifth.
Loading...
or
Not Currently Available for Direct Purchase