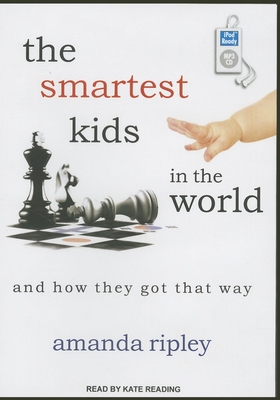 The Smartest Kids in the World

How do other countries create "smarter" kids? In a handful of nations, virtually all children are learning to make complex arguments and solve problems they've never seen before. They are learning to think, in other words, and to thrive in the modern economy. What is it like to be a child in the world's new education superpowers? In a global quest to find answers for our own children, author and Time magazine journalist Amanda Ripley follows three Americans embed-ded in these countries for one year. Kim, fifteen, raises $10,000 so she can move from Oklahoma to Finland; Eric, eighteen, exchanges a high-achieving Minnesota suburb for a booming city in South Korea; and Tom, seventeen, leaves a historic Pennsylvania village for Poland. Through these young informants, Ripley meets battle-scarred reformers, sleep-deprived zombie students, and a teacher who earns $4 million a year. Their stories, along with groundbreaking research into learning in other cultures, reveal a pattern of startling transformation: none of these countries had many "smart" kids a few decades ago. Things had changed. Teaching had become more rigorous; parents had focused on things that mattered; and children had bought into the promise of education. A journalistic tour de force, The Smartest Kids in the World is a book about building resilience in a new world as told by the young Americans who have the most at stake.

Amanda Ripley is an investigative journalist for "Time," the "Atlantic," and other magazines. She is also the author of "The Unthinkable: Who Survives When Disaster Strikes--and Why," the basis for a PBS documentary. An Emerson Fellow at the New America Foundation, she lives in Washington, D.C., with her husband and son.

Stage actress Kate Reading has been a freelance narrator for over twenty years. She has received multiple Audie Awards and nominations, as well as numerous Earphones Awards from "AudioFile" magazine, which has named her Narrator of the Year and, for two years running, Best Voice in Science Fiction and Fantasy.
Loading...
or support indie stores by buying on