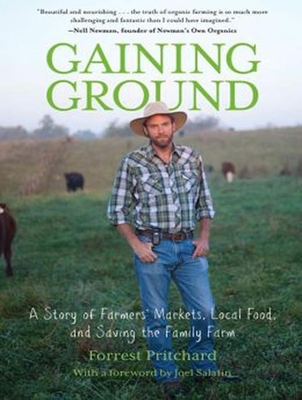 A Story of Farmers' Markets, Local Food, and Saving the Family Farm

One fateful day in 1996, after discovering that five freight cars' worth of glittering corn have reaped a tiny profit of $18.16, young Forrest Pritchard vows to save his family's farm. What ensues-through hilarious encounters with all manner of livestock and colorful local characters-is a crash course in sustainable agriculture. Pritchard's biggest ally is his renegade father, who initially questions his son's career choice and rejects organic foods for sugary mainstream fare. But just when the farm starts to turn heads at local farmers' markets, his father's health takes a turn for the worse. With poetry and humor, this inspiring memoir tugs on your heartstrings and feeds your soul long after you've finished.

Forrest Pritchard is a professional farmer, writer, and public speaker. Holding degrees in English and geology from William and Mary, Forrest studied under George Garrett with the University of Virginia's MFA program. He has been published in national magazines, and his farm, Smith Meadows, has been featured on NPR and the "Washington Post."

Roger Wayne began writing and playing with voices at a very young age, which eventually led to his performing Shakespeare and having large roles in short and feature-length independent films, as well as radio and TV commercials. Roger's approach to his career largely involves using the power of voice as the center of everything he does as an actor.
Loading...
or
Not Currently Available for Direct Purchase