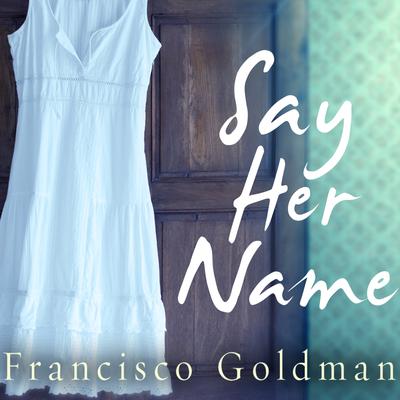 Celebrated novelist Francisco Goldman married a beautiful young writer named Aura Estrada in a romantic Mexican hacienda in the summer of 2005. The month before their second anniversary, during a long-awaited holiday, Aura broke her neck while body-surfing. Francisco, blamed for Aura's death by her family and blaming himself, wanted to die, too. But instead he wrote Say Her Name, a novel chronicling his great love and unspeakable loss, tracking the stages of grief when pure love gives way to bottomless pain.
Suddenly a widower, Goldman collects everything he can about his wife, hungry to keep Aura alive with every memory. From her childhood and university days in Mexico City with her fiercely devoted mother to her studies at Columbia University, through their newlywed years in New York City and travels to Mexico and Europe—and always through the prism of her gifted writings—Goldman seeks her essence and grieves her loss. Humor leavens the pain as he lives through the madness of utter grief and creates a living portrait of a love as joyous and playful as it is deep and profound.
Say Her Name is a love story, a bold inquiry into destiny and accountability, and a tribute to Aura, who she was and who she would have been.