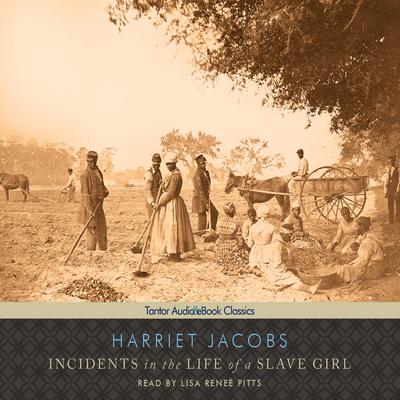 Incidents in the Life of a Slave Girl (Digital Audiobook)

Published in 1861, Harriet Jacobs's Incidents in the Life of a Slave Girl is an autobiographical account of the author's experiences as a slave in nineteenth-century North Carolina, from her relatively happy childhood to the brutality she experienced as a teenager and young woman to her eventual escape to the North. One of the few slave narratives written by a woman, Jacobs's work deals frankly with the horrors of slavery, shedding light on the abuses female slaves in particular often endured at the hands of their masters. Incidents in the Life of a Slave Girl is a gripping, unflinchingly honest account of slavery, one that stands as an important counterpoint to male slave narratives by such authors as Frederick Douglass.

Lisa Renee Pitts is an award-winning actress in theater, television, and film, as well as an accomplished audiobook narrator. She has been seen Off-Broadway, in Europe, and in regional theaters across the United States, performing leading roles in such prominent plays as A Raisin in the Sun, Doubt, Waiting forLefty, Valley Song, and Our Town. Her television appearances include The Shield and Law and Order, and she played the recurring role of Allison Sawyer on the hit family drama Lincoln Heights for the ABC Family Channel. Lisa's audiobook titlesinclude biographies, fiction, nonfiction and children's novels, including Pushkin and the Queen of Spades by Alice Randall, for which she won an AudioFile Earphones Award for excellence in narration. Other notable titles are Left to Tell by Immaculee Ilibagiza, Better Than I Know Myself by Virginia DeBerry and Donna Grant, and My Name Is Not Angelica by Scott O'Dell. Lisa is a graduate of Rutgers University, where she received her B.F.A. in Theater Arts. She lives in Burbank, California.