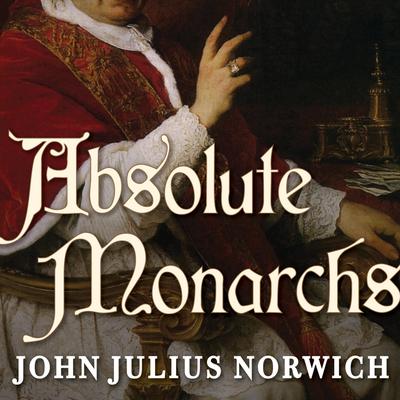 With the papacy embattled in recent years, it is essential to have the perspective of one of the world's most accomplished historians. In Absolute Monarchs, John Julius Norwich captures nearly two thousand years of inspiration and devotion, intrigue and scandal. The men (and maybe one woman) who have held this position of infallible power over millions have ranged from heroes to rogues, admirably wise to utterly decadent. Norwich, who knew two popes and had private audiences with two others, recounts in riveting detail the histories of the most significant popes and what they meant politically, culturally, and socially to Rome and to the world.

Norwich presents such brave popes as Innocent I, who in the fifth century successfully negotiated with Alaric the Goth, an invader civil authorities could not defeat, and Leo I, who two decades later tamed (and perhaps paid off) Atilla the Hun. Here, too, are the scandalous figures: Pope Joan, the mythic woman said (without any substantiation) to have been elected in 855, and the infamous "pornocracy," the five libertines who were descendants or lovers of Marozia, debauched daughter of one of Rome's most powerful families.

Absolute Monarchs brilliantly portrays such reformers as Pope Paul III, "the greatest pontiff of the sixteenth century," who reinterpreted the Church's teaching and discipline, and John XXIII, who in five short years starting in 1958 "opened the church to the the twentieth century," instituting reforms that led to Vatican II. Norwich brings the story to the present day with Benedict XVI, who is coping with a global priest sex scandal.

Epic and compelling, Absolute Monarchs is the astonishing story of some of history's most revered and reviled figures, men who still cast light and shadows on the vatican and the world today.