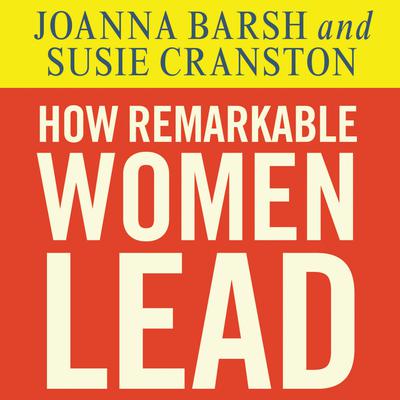 The Breakthrough Model for Work and Life

Based on five years of proprietary research, How Remarkable Women Lead speaks to you as no other book has, with its hopeful outlook and unique ideas about success. It's the new "right stuff" of leadership, raising provocative issues such as whether feminine leadership traits (for women and men) are better suited for our fast-changing, hyper-competitive, and increasingly complex world.

In this book, McKinsey & Company consultants Joanna Barsh and Susie Cranston establish the links between joy, happiness, and distinctive performance with the groundbreaking model of Centered Leadership.

The book's personal stories and related insights show you the magic that happens when you put the five elements of Centered Leadership–meaning, framing, connecting, engaging, and energizing, to work. They include:

How Remarkable Women Lead is both profoundly moving and actionable. No matter who you are, this book will help you attain a practical plan for breaking through at both work and in life.