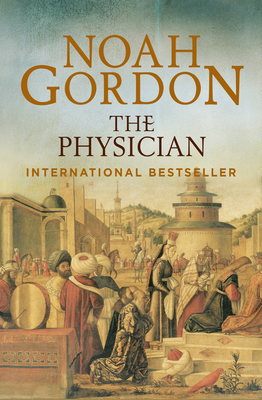 An orphan leaves Dark Ages London to study medicine in Persia in this "rich" and "vivid" historical novel from a New York Times-bestselling author (The New York Times).

A child holds the hand of his dying mother and is terrified, aware something is taking her. Orphaned and given to an itinerant barber-surgeon, Rob Cole becomes a fast-talking swindler, peddling a worthless medicine. But as he matures, his strange gift--an acute sensitivity to impending death--never leaves him, and he yearns to become a healer. Arab madrassas are the only authentic medical schools, and he makes his perilous way to Persia. Christians are barred from Muslim schools, but claiming he is a Jew, he studies under the world's most renowned physician, Avicenna. How the woman who is his great love struggles against her only rival--medicine--makes a riveting modern classic. The Physician is the first book in New York Times-bestselling author Noah Gordon's Dr. Robert Cole trilogy, which continues with Shaman and concludes with Matters of Choice.

Praise For The Physician (Cole Trilogy #1)…

“Gordon’s compelling novel recreates the 11th century so powerfully that the reader is propelled through its several hundred pages by a tidal wave of imagination and authentic detail.” —Publishers Weekly

“Populated by engaging characters, rich in incident and vivid in historical detail, [The Physician] is a pleasure.” —The New York Times

“[The Physician]has the flavor of Ken Follett’s The Pillars of the Earth, but with a deeper character development and story arc . . . . An insightful and unforgettable read.” —Zoltaire’s Blog

“An adventurous and inspiring tale of a quest for medical knowledge pursued in a violent world full of superstition and prejudice.” —Library Journal

Noah Gordon has had outstanding international success. The Physician, now a major motion picture, has been called a modern classic, and booksellers at the Madrid Book Fair voted it "one of the 10 best-loved books of all time." Shaman was awarded the James Fenimore Cooper Prize for historical fiction. Both of these books, and five of the author's other novels--The Rabbi, The Death Committee, The Jerusalem Diamond, Matters of Choice, and The Winemaker--are published in digital formats by Barcelona eBooks and Open Road Integrated Media. Gordon's novel, The Last Jew, will also be published digitally in the near future. He lives outside of Boston with his wife, Lorraine.
Loading...
or support indie stores by buying on