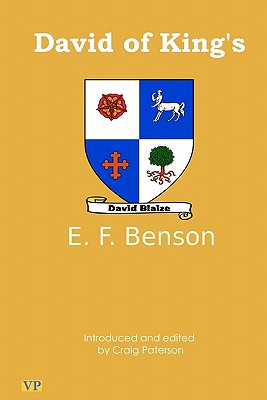 David of King's is E.F. Benson's witty and well-observed novel of varsity life set at King's College, Cambridge during the early part of the 20th century. The novel was first published in 1924 when Benson was in his later fifties. The work was penned by Benson because of the success he had enjoyed with David Blaize, his schoolboy novel, first published in 1916. David of King's takes off where David Blaize ends. The novel covers three years of Blaize's undergraduate life. Enjoy more tales of Blaize and his different friendships with Maddox and Bags as they live and learn together as King'smen. David of King's is, above all, a "jolly enjoyable" read. Benson tells an absorbing story and he draws the reader into the cultural and social world of Blaize at King's College and more generally of Cambridge University. His stories of Blaize's encounters with colourful and eccentric dons--A.G. and Mr. Crowfoot--based on the real life characters O.B. (Oscar Browning) and Mr. J.E. Nixon--are absolute gems of affectionate humour and should not be missed. This Viewforth Classic edition is a newly prepared and corrected version of the original text. Edited, with introduction and notes, by Dr. Craig Paterson. Previously published by Viewforth Press: David Blaize, 2010 (ISBN: 1453763104)

Edward Frederic Benson (1867-1940) was a prolific and much loved English novelist, biographer and short story writer. He was educated at Marlborough College, King's College, Cambridge and the British School of Archaeology in Athens. Benson is most famous for a series of comic novels he published during the 1920's and 1930's--"Mapp and Lucia"--set in the small fictitious coastal town of Tilling. Benson was awarded an OBE by the King and was also made an Honorary Fellow of Magdalen College, Oxford. He served as Mayor of the town of Rye from 1934-1937. Craig Paterson is a philosopher and author. He now lives in Los Angeles, California.
Loading...
or support indie stores by buying on