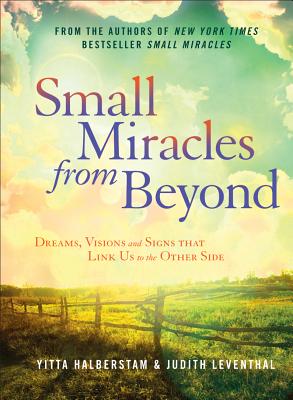 Small Miracles from Beyond

Dreams, Visions and Signs That Link Us to the Other Side

This uplifting addition to a bestselling series will provide insight and solace to readers through inspiring true stories that demonstrate the soul's immortality. In their eighth compilation, Halberstam and Leventhal move beyond their earlier focus on our mortal world to examine the other side: death and the afterlife. Rich in miracles and extraordinary events, these incredible tales show how the connections forged with our loved ones exist through eternity--and how their intercession with us on earth continues long after they have passed on.

Yitta Halberstam is descended from a long line of Hasidic mystics and rabbis who were famous in Europe for their spiritual teachings and healings. She is an established author and speaker in the field of Jewish spirituality and has appeared in mainstream print such as New York magazine, Parade, and Seventeen, while her Jewish writings have been published in more than 50 Anglo-Jewish publications in the US, including AMI magazine (an Orthodox Jewish weekly). She lives in Brooklyn, NY. Judith Leventhal, C.S.W., is a licensed psychotherapist in private practice. She has lectured extensively throughout the country on a variety of topics, and her writing has appeared in numerous magazines and periodicals. She lives in Brooklyn, NY.
Loading...
or
Not Currently Available for Direct Purchase