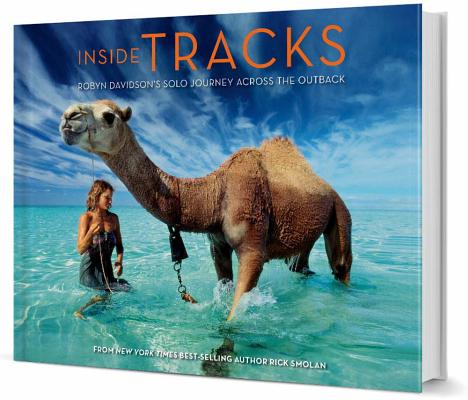 Through stunning images, acclaimed photographer Rick Smolan tells the astounding story of Robyn Davidson, who crossed the desolate Australian outback accompanied only by four camels and a dog. Now, Davidson's exhilarating wilderness adventure is about to become a major motion picture, and this remarkable volume presents both Smolan's original photographs along with those from the upcoming movie. As an exciting bonus, the book incorporates Aurasma technology that enables readers to point their smart devices at one of the pictures from the original journey and then watch that scene as it is brought to life in the movie.

Robyn Davidson was born in 1950 in a small country town in Queensland, Australia. She studied biology at Queensland University and music in Sydney, and later returned to Queensland to study Japanese and philosophy. Davidson then moved to Alice Springs where her trek across Australias outback began. Tracks (Pantheon Books), Davidsons internationally acclaimed account of the year she spent crossing Australias outback, won the Thomas Cook Travel Book Award and has appeared in more than ten foreign language editions. In the years since Tracks, Davidson has lived in London, New York, and Australia. She returned to Alice Springs to write her first novel, Ancestors (Simon & Schuster). Rick Smolan, CEO of Against All Odds Productions is a New York Times bestselling author with more than five million copies of his books in print. A former Time, Life, and National Geographic photographer, Smolan is best known as the co-creator of the "Day in the Life" book series. His global photography projects, which feature the work of hundreds of the worlds leading photographers and combine creative storytelling with state-of-the-art technology, are regularly featured on the covers of prestigious publications around the globe including Fortune, Time, and GEO. His most recent project, The Human Face of Big Data, captures how our planet is developing a nervous system. The "Human Face" iPad app won the 2013 WEBBY for best educational app and the companion TV documentary won the 2014 award for Best Cinematography at the Boston Film Festival. More than a million people have watched Smolans Natashas Story on TED.com (NatashaStory.com). Fortune magazine describes Against All Odds as "One of the 25 Coolest Companies in America." Smolan lives in New York City with his wife and business partner, Jennifer Erwitt, and their children, Phoebe and Jesse.
Loading...
or
Not Currently Available for Direct Purchase