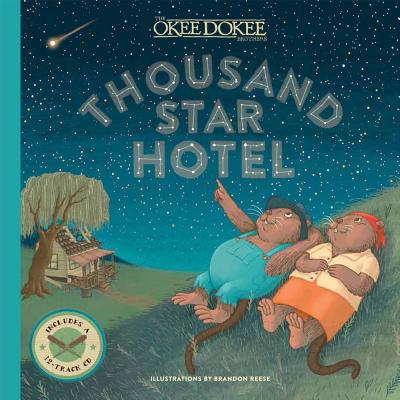 The Grammy(R)-winning Okee Dokee Brothers create a fanciful story--inspired by the folktale "The Fisherman and His Wife"--about the things we wish for . . . and the things we really need.
I'm sleepin' in a thousand star hotel.
Gold leaf pillow for my head.
Feel like a king on a king-size riverbed. Once upon a time there were two muskrats who lived in a cabin near a big old river. Mr. Muskrat dreamt of catching enough fish to make them rich; Mrs. Muskrat was happy if they caught enough for a good supper. Then, one day, they reel in a giant golden catfish who promises to grant their wish if they set him free. The two muskrats agree to let the fish off the hook and he does keep his word . . . but in a most unexpected and magical way. CD INCLUDES:
1. Thousand Star Hotel (Audiobook)
2. Thousand Star Hotel (Song)
3. Gone Wishin'
4. King Kong Kitchie Kitchie Ki-Me-O
5. Along for the Ride
6. Small and Simple
7. Memphis Town
8. Sister Moon and Brother Sun
9. Evergreen
10. Baby Mine
11. Lighten Your Load
12. Last Lullaby.

As childhood friends growing up in Denver, CO, Joe Mailander and Justin Lansing were always exploring the outdoors. Whether it was rafting down their neighborhood creek or discovering hiking trails through the Rocky Mountains, Joe and Justin were born adventurers. They started playing music together in high school, and now, as the Grammy(R) Award-winning Okee Dokee Brothers, they have put their passion for the outdoors at the heart of their Americana folk music. Joe and Justin make family music and write stories with a goal to inspire families to get outside and get creative. They believe this can motivate families to gain a greater respect for the natural world, for their communities, and for themselves. Learn more about them at okeedokee.org. Brandon Reese created the distinctive cover artwork for The Okee Dokee Brothers' albums, and is also the illustrator for a number of clients including Nickelodeon, Nick Jr., eeBoo, BOOM! Studios, and more. Brandon lives in NC with his wife and young son. Learn more about him online at brandonreese.com.
Loading...
or
Not Currently Available for Direct Purchase