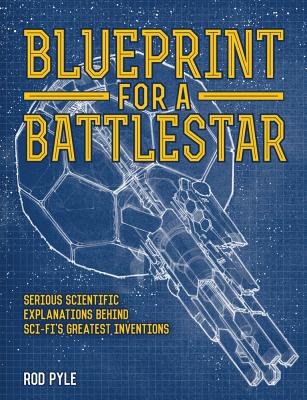 Blueprint for a Battlestar

Through stunning images, including 75 illustrations created exclusively for this book, 25 remarkable and memorable technologies from the world of sci-fi are explored.
With expertly written text by NASA insider Rod Pyle, each concept is explained and dissected to reveal the real science behind it. Some are temptingly within our reach--such as cyborgs and artificial intelligence--others are further off, but fast approaching reality (think bio-ports or cloaking devices). All are fascinating and make wonderful explorations into the science of the future as we understand it today.

Rod Pyle is a NASA and JPL (Jet Propulsion Laboratory) insider, as well as being a writer and documentary filmmaker. He has written for numerous science and science fiction publications, including Astronautics Notebook, Foundation Journal, Starlog, and DreamWatch. He has written several books, including Destination Moon (Smithsonian Books), Innovation the NASA Way (McGraw-Hill), Missions to the Moon (Sterling), and Curiosity: An Inside Look at the Mars Rover Mission and the People Who Made it Happen (Prometheus Books). He has also worked as a visual effects coordinator for Star Trek: Deep Space 9.
Loading...
or
Not Currently Available for Direct Purchase